Rasa - Media sources said on Friday that Jeish al-Fatah terrorists tried to smuggle weapons and a number of abducted civilians in the buses evacuating them from Eastern Aleppo, breaching the terms of the newly-concluded agreement with Damascus. 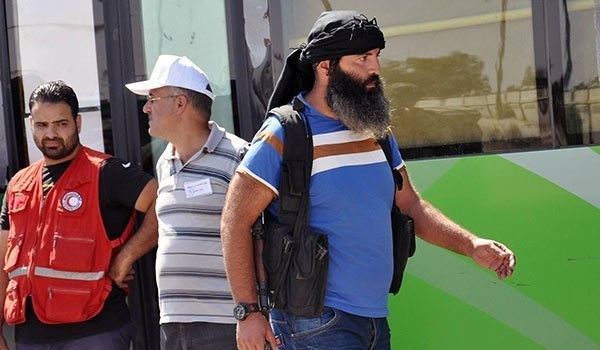 RNA - The Syrian state news agency reported that the militants tried to bring heavy weapons out with them instead of light weapons, violating the terms of the agreement with the Syrian authorities.

The militants were also supposed to release captives taken from the pro-government forces, however, they violated this term of the agreement too as they tried to take the captives out with them.

Reports said earlier today that the terrorist groups' artillery units shelled heavily al-Ramouseh corridor in the Southern parts of Aleppo city regardless of the ceasefire, blocking once again exit of remaining militants and their families from the city.

The terrorists violated the ceasefire and shelled al-Ramouseh corridor through which militants and their families were leaving the Eastern neighborhoods of the city.

Green buses that were in al-Ramouseh left the scene after terrorists targeted the corridor and blocked evacuation of militants.

The Syrian TV for its part confirmed violation of ceasefire by the terrorists and reported that the militant groups have captured a number of civilians.

In the meantime, more groups of militants left Aleppo's Eastern districts with their families.

According to more reports, the terrorist groups have swapped a number of abducted people with captured terrorists, while trying to take others with them.

Tags: Syria Aleppo
Short Link rasanews.ir/201mmB
Share
0
Please type in your comments in English.
The comments that contain insults or libel to individuals, ethnicities, or contradictions with the laws of the country and religious teachings will not be disclosed