Rasa - The Yemeni army and popular forces continued their advances in the cities of Ta'iz and Sana'a, killing and injuring several pro-Saudi mercenaries. 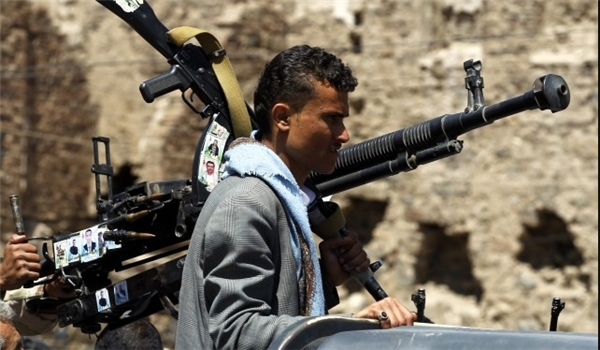 RNA - The Yemeni forces recaptured more areas in the Western part of Ta'iz city and the Eastern part of Sana'a city on Wednesday.

At least 10 pro-Saudi mercenaries were killed and many more were injured in the Yemeni operations in Jabal al-Han of al-Zobab region.

In Sana'a city, the Yemeni forces conducted fresh military operations against the pro-Saudi mercenaries in the Ninth district in the Eastern part of Sana'a.

Several other terrorists were also killed in the Yemeni operations in Sana'a city.

On Tuesday, the Yemeni army continued its military operations deep into Southern Saudi Arabia, and pounded a newly-established military base in Assir province with several Katyusha rockets.

The Yemeni army's Katyusha rockets precisely hit a new Saudi military base near the kingdom's al-Hajer military base in Assir province on Monday night.

Several pro-Saudi mercenaries were killed and wounded in the Katyusha attacks.

Earlier on Tuesday, a senior Yemeni military commander disclosed that his forces took full control of all regions in the Southern part of Ma'rib province, while their comrades foiled several attempts by the Saudi mercenaries to pave their way into the strategic areas in al-Bayda province.

Meantime, al-Houthi reiterated that a group of Saudi mercenaries backed by the Saudi air force attempted four times to make their way into al-Kasadeh heights in al-Bayda province, but were pushed back.

"The Yemeni forces killed and wounded several pro-Saudi mercenaries and forced others to flee the scene after heavy clashes," he added.

In relevant remarks on Sunday, a senior commander of the Yemeni popular committees warned that the Saudi-US coalition has hatched plots to take control of the oil-rich regions in the Western coasts of Yemen.

"The US seeks to take control of the countries' wealth and capacities under the pretext of fighting against terrorism and protecting the international maritime activities," Abdullah Hassan al-Qora told.

He said that intelligence authorities have gained information saying that the Saudi-US coalition is transferring the US and Israel-made warfare equipment and their mercenaries from other Yemeni provinces to the Western parts of the war-ravaged country.

"The Saudi-US coalition is seeking to increase military attacks against the Western coasts of Yemen in addition to sending fresh forces to those areas to disintegrate the country and take control of its oil and gas resources," al-Qora said.

Saudi Arabia has been striking Yemen since March 2015 to restore power to fugitive president Mansour Hadi, a close ally of Riyadh. The Saudi-led aggression has so far killed at least 12,000 Yemenis, including hundreds of women and children.

Tags: Yemen Saudi
Short Link rasanews.ir/201mld
Share
0
Please type in your comments in English.
The comments that contain insults or libel to individuals, ethnicities, or contradictions with the laws of the country and religious teachings will not be disclosed