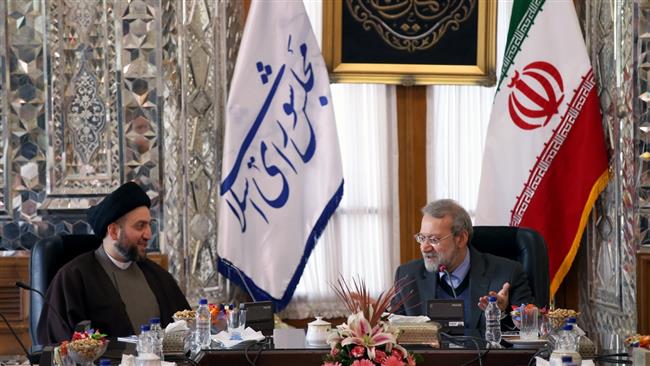 RAN - “The biggest threat to the security and stability of the Muslim world is to fuel religious differences and provoke conflicts among Muslims,” Larijani said in a meeting with the head of the Iraqi National Alliance (INA), Ammar al-Hakim, in Tehran on Tuesday.

He added that Iraq enjoys an important position in the Middle East and called for collective efforts to help the war-stricken country solve its problems.

He emphasized that Iran would continue to support the Iraqi government and nation in all areas.

He hailed the Iraqi parliament’s recent recognition of the Shia-majority Popular Mobilization Units (PMU), known as Hashd al-Sha’abi, as a subdivision of the country’s armed forces, saying the move would greatly help promote national stability and security in Iraq.

The Iraqi parliament on November 26 approved a law to give full legal status to PMU fighters, who have joined with government forces in counter-terrorism operations against Daesh Takfiri militants across the country.

The legislation, tabled by the INA, recognizes Hashd al-Sha’abi as part of the national armed forces, places the volunteer fighters under the command of Prime Minister Haider al-Abadi, and grants them the right to receive salaries and pensions just like the regular army and police.

Hakim, for his part, said Iran and Iraq must take steps to further develop cordial relations given their broad cultural and religious commonalities and similar political and economic interests.

The INA head added that the Iraqi parliament’s vote on Hashd al-Sha'abi was an important step in promoting the participation of the Iraqis in ensuring the security of their country.

On Sunday, Leader of the Islamic Revolution Ayatollah Seyyed Ali Khamenei received the INA head and advised the Iraqi National Alliance not to trust the Americans.

The Leader said the United States has never been seeking to uproot Takfiri terrorism, but it is rather making efforts to preserve some terror groups in the Middle East to advance its goals, warning that Washington has always been against powerful Muslim countries such as Iraq.

INA, which holds the majority of seats in the Iraqi parliament, includes four political parties, namely the State of Law Coalition, the Islamic Supreme Council of Iraq, the National Reform Trend Party and the Sadrist Movement.

Tags: Muslim Iran Larijani Iraq Hakim
Short Link rasanews.ir/201mlI
Share
0
Please type in your comments in English.
The comments that contain insults or libel to individuals, ethnicities, or contradictions with the laws of the country and religious teachings will not be disclosed