Rasa - US Defense Secretary Ashton Carter has arrived in Iraq to evaluate progress in the fight to retake the northern city of Mosul which fell to the Daesh terrorist group in June 2014. 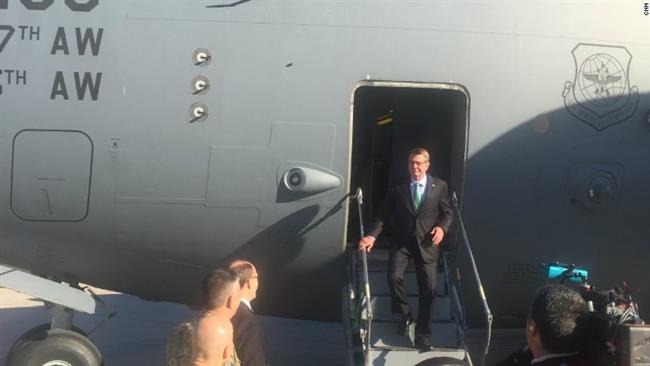 RNA - Carter arrived in Baghdad Sunday on an unannounced visit and will meet with Prime Minister Haider al-Abadi as well as top US and coalition commanders.

He will "survey key locations directly supporting the battle for Mosul," Pentagon Press Secretary Peter Cook said in a statement.

The visit comes as an Iraqi army source said Saturday that US Air Force jet fighters mistakenly struck Iraqi soldiers’ position in Mosul the previous day, killing at least 90 of them.

The airstrike targeted soldiers from the 9th Armored Division of the Iraqi army, destroying eight infantry fighting vehicles as well as four Humvee military trucks. Some 100 soldiers were also wounded as a result of the attack, the source added.

On the same day, Iraqi Special Operations Forces managed to liberate the neighborhoods of Adl, al-E’lam and al-Ta’mim in the eastern part of Mosul, located some 400 kilometers north of the capital Baghdad, and raised the national flag over a number of buildings there, Arabic-language al-Forat news agency reported.

Carter flew to Baghdad from Bahrain, where he attended an international security conference on Saturday.

The Pentagon chief announced that the US planned to send 200 more troops to Syria to allegedly join operations aimed at retaking the Syrian city of Raqqah from the Daesh terrorist group.

They will add to 300 American special forces already operating in Syria, which has been fighting foreign-backed militancy for years.

"The seizure of these two cities (Mosul and Raqqah) is necessary to ensure the destruction of ISIL's parent tumor in Iraq and Syria — the primary objective of our military campaign — and put ISIL (Daesh) on an irreversible path to a lasting defeat," he said.

There are about 5,000 American troops in Iraq.

Tags: US Mosul Iraq
Short Link rasanews.ir/201mjj
Share
0
Please type in your comments in English.
The comments that contain insults or libel to individuals, ethnicities, or contradictions with the laws of the country and religious teachings will not be disclosed