Iran reserves right to respond to US extension of bans law

Rasa - Iran’s nuclear chief says the country reserves the right to retaliate as it sees fit against a move by the US Congress to extend the Iran Sanctions Act. 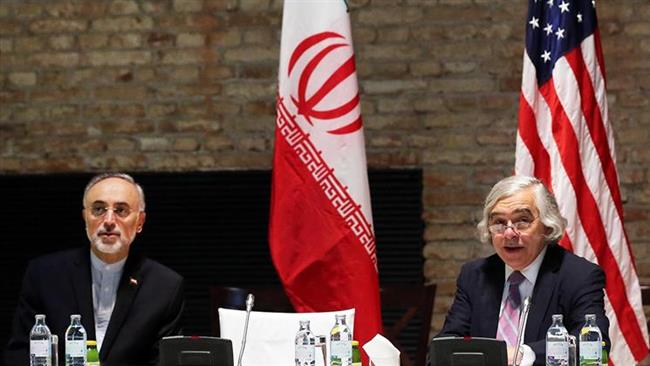 RNA - Ali Akbar Salehi, the head of the Atomic Energy Organization of Iran (AEOI), made the remarks in a meeting with US Energy Secretary Ernest Moniz in Vienna on Sunday.

The two officials are in the Austrian capital to attend the “International Conference on Nuclear Security: Commitments and Actions,” which is to be held there under the auspices of the International Atomic Energy Agency (IAEA) from December 5 to 9.

Salehi further communicated Iran’s strong protest and serious concern over the congressional move, emphasizing that Tehran has the right to deliver a proportionate response.

Following in the footsteps of the House of Representatives, the US Senate recently voted to extend the Iran Sanctions Act (ISA) for another 10 years.

The law, which would authorize the US president to re-impose sanctions on Iran, was first adopted in 1996 to punish investments in the Islamic Republic over its nuclear program and support for anti-Israeli resistance groups. The ISA now needs President Barack Obama’s signature to turn into law.

This is while Iran had all nuclear-related sanctions lifted on the back of the Joint Comprehensive Plan of Action (JCPOA), the nuclear accord it signed with the P5+1 group of countries -- the US, Britain, Russia, France and China plus Germany -- last year in Vienna.

Salehi further noted that Iran has been committed to the JCPOA -- which obliged it to introduce limits to its nuclear activities in exchange for the sanctions relief.

The commitment, he added, has been verified by the IAEA, which monitors the JCPOA’s implementation process, urging the US to likewise honor its contractual obligations, especially by preventing the potential implementation of the ISA.

IAEA Director General Yukiya Amano said in April that Iran had even gone beyond its obligations under the JCPOA.

For his part, Moniz said he would relay Iran’s concerns to the US commander-in-chief, saying the US government is committed to the JCPOA.

Iranian authorities have slammed the ISA’s extension as a blatant violation of the nuclear agreement, vowing proper counter-measures.

On Sunday, Iranian lawmakers urged the administration of President Hassan Rouhani to take “due retaliatory measures” against the ISA extension.

Tags: US Iran JCPOA
Short Link rasanews.ir/201mhV
Share
0
Please type in your comments in English.
The comments that contain insults or libel to individuals, ethnicities, or contradictions with the laws of the country and religious teachings will not be disclosed