Rasa - Everyone is worried about stopping terrorism in Syria’s Aleppo. The problem is, many are also participating in it. 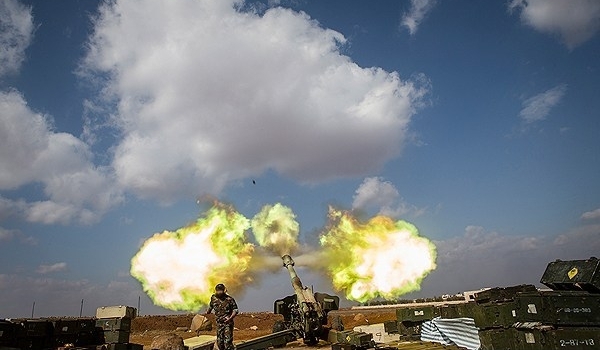 RNA - That's why the fall of rebel-held Eastern Aleppo would not mean the end of the US-led war against the Syrian government. The regime changers and terror proxies are acting without a conscience – to preserve regional hegemony, to protect Israel, and to erect an American caliphate on the parcel.

To be sure, the regime changers would be powerless if they couldn't entice “moderate” terrorists to do their work. And doing the devil’s job is exactly what the “moderate” terror outfits have been doing for the past five years or so.

That would make any hope of a peace deal more difficult as well. Here, it's not the Syrian government and Iranian-Russian allies which killed the political process. Syria, Russia and Iran have sought to reach a political resolution in talks in Geneva. The United Nations' Syria envoy, Steffan de Mistura, has presided over numerous Russia-drafted cease-fires and agreements for humanitarian relief that collapsed or were never implemented. The latest effort at a halt in fighting failed because the US-backed rebels didn't want it.

Another problem is that the opposition groups apparently have no power over the armed factions that are currently fighting against the Syrian government. They want the solution for Syria to include the ouster of President Bashar al-Assad and the partitioning of the country into a federal state, which is out of question.

To complicate matters, America’s “moderate” rebels made allegiance to Al-Qaeda and ISIL when they realised they didn't look like sure bets to march into the Syrian capital single-handedly. Reflecting their fading fortunes in Eastern Aleppo in general and Al-Qaeda’s Nusra Front in particular, they have just announced the formation of a new alliance to organize their defense of what is left of their stronghold in eastern neighborhoods.

They call this silly new faction, the “Aleppo Army,” and they would like us to believe that the force led by the Levant Front, a Turkey-allied rebel group linked with the Free Syrian Army, can now shore up their defenses after losing almost half of their territory over the past weekend.

This only validates one thing: Iran, Syria and Russia are fighting American-funded terrorists and that the blood-thirsty goons never envisage a peaceful cohabitation of the various communities.

A reminder that the fall of Eastern Aleppo does in no way mean the end of foreign-backed terrorism in Syria. Far from it, an end to the fighting is nowhere in sight. Syria is an important place for the globalist criminal hordes and they are not looking to make friends with Syria. There are always other places under their power from which they can prolong the humanitarian catastrophe.

The uncomfortable truth is that there can be no peaceful solution to the crisis under these awful circumstances. The US-backed war is the main culprit for the perils of sectarian polarization. In recent days this has been reinforced by the Saudi-led camp – Israel, Turkey, Jordan, Qatar and the Arab Emirates - which has ratcheted up the latest violent turn in Aleppo.

On that score, it’s a wild card war without end. The dig-in parties will continue to place Damascus in their gun sights, pitting Sunnis against Shiites, and Kurds against Christians - today, tomorrow, and for as far as the eye can see. They will continue to provide weapons and assistance to their terror proxies. They won't stop the war short of total destruction of Syria.

Tags: Syria Aleppo Terrorism
Short Link rasanews.ir/201mgd
Share
0
Please type in your comments in English.
The comments that contain insults or libel to individuals, ethnicities, or contradictions with the laws of the country and religious teachings will not be disclosed