Iranian nation will not surrender to terrorism

Rasa – The Iranian Minister of Information said the crimes of terrorist groups are a disgrace and cowardice and hell will be their gift and the Muslim world will not surrender in the face of such crimes. 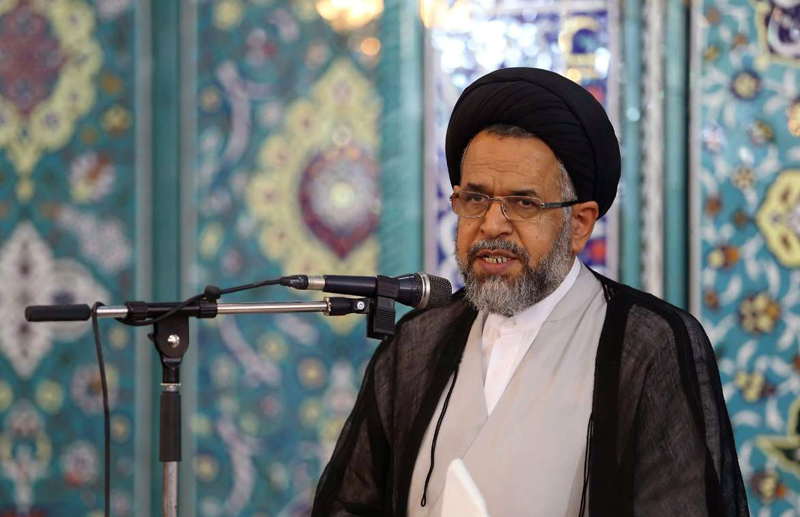 RNA – Speaking in Ahvaz at the funeral for those killed in a terrorist attack in the Iraqi city of Hillah, Hujjat al-Islam Sayyed Mahmoud Alavi, Iran’s Minister of Information, conveyed a message of condolences from the Supreme Leader of the Islamic Revolution, Ayatollah Sayyed Ali Khamenei, and President Hasan Rouhani to the people of Khuzestan.

The terrorist attack, which Daesh claimed responsibility for, involved a truck bomb that exploded at a gas station in the village of Shomali in the suburbs of al-Hillah and killed at least 73 people, including many Iranian pilgrims returning from the Arba’in pilgrimage.

In this message, he said that Shi’ah Muslims have become used to martyrdom throughout history and added, “Today, the hearts of Shi’ahs and lovers of the Ahlul-Bayt are full of love for Imam Husayn and are ready for martyrdom on this path.”

He referred to the Shi’ah welcoming of martyrdom and said, “Martyrdom is something natural in Shi’ah culture and Shi’ah will never accept humiliation and our message to the Americans, Saudis and Zionist supporters of extremist and terrorist groups is that martyrdom is considered an honour among Shi’ahs.

His Eminence said the slogan of “woe unto the wretched” is the permanent slogan of Shi’ah Muslims which once again showed itself in the grand social gathering of Arba’in. “The path of Shi’ahs is the path of Imam Husayn, his son, Imam Ali al-Sajjad, and his companions,” he said.

He pointed out that in the course of the pilgrimage of Imam Husayn, many people were tortured and said Shi’ahs adopted the path of Imam Ali and chose death on the path of God and will never surrender to oppression and death for them is a source of dignity.

The Minister of Information said the crimes of terrorist groups are a disgrace and cowardice and hell will be their gift and the Muslim world will not surrender in the face of such crimes.

Hujjat al-Islam Alavi said that martyrdom on the path of God is our path and we will never surrender o terrorism and in opposition to such crimes, we will should “woe unto the wretched.”

Tags: Hillah karbala Arbain Iran Arba’in Arba'een Arbaeen Alavi Mahmoud Alavi Islamic Republic of Iran Iraq
Short Link rasanews.ir/201mfc
Share
0
Please type in your comments in English.
The comments that contain insults or libel to individuals, ethnicities, or contradictions with the laws of the country and religious teachings will not be disclosed