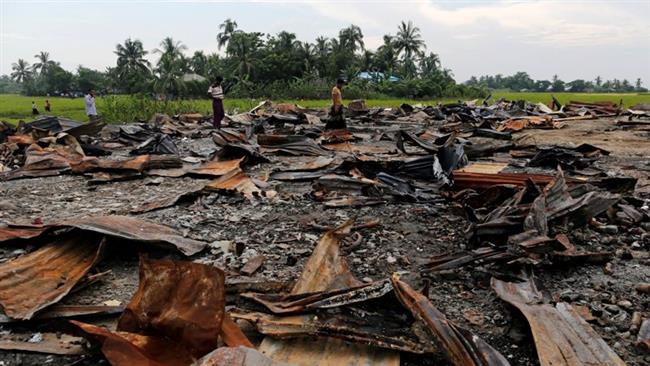 RNA - On Monday, the HRW released the high-resolution imagery, which had been recorded on October 22, calling on the Myanmarese government to urgently allow the United Nations (UN) to assist in investigating the reported destruction of villages in the area.

The destruction in Maungdaw district “demands an impartial and independent investigation, something the Burmese government has yet to show it’s capable of doing,” said Phil Robertson, the deputy Asia director at Human Rights Watch.

“These satellite images of village destruction could be the tip of the iceberg given the grave abuses being reported,” Robertson said.

“The government should end its blanket denial of wrongdoing and blocking of aid agencies, and stop making excuses for keeping international monitors from the area,” he said.

The East Asian country’s military does not allow rights organizations and journalists to visit the remote region of Rakhine, which borders Bangladesh.

A government-sponsored delegation of UN aid agencies and foreign diplomats was expected to visit the region on Monday, marking the first time international aid agencies would be allowed into the area since October 9.

Northern Rakhine has been under a military lockdown since an alleged attack on the country’s border guards three weeks ago left nine police officers dead.

The government has accused Rohingyas of waging the armed assault, and an army search for the perpetrators has led to the killing of over 30 people and the arrest of dozens more, according to official reports.

The Rakhine region, where Rohingya Muslims form the majority population, has been the scene of communal violence at the hands of Buddhist extremists since 2012.

Hundreds of people have been killed and tens of thousands more have been forced to flee their homes and live in squalid camps in dire conditions within Myanmar and other countries, including Thailand, Malaysia and Indonesia.

According to the UN, Rohingyas are one of the most persecuted minorities cross the globe.

The government denies full citizenship to the Rohingya population, branding them illegal immigrants from Bangladesh, even as many trace their lineage in Myanmar back generations.

Tags: Ruhingya Muslim HRW UN Myanmar
Short Link rasanews.ir/201mTo
Share
0
Please type in your comments in English.
The comments that contain insults or libel to individuals, ethnicities, or contradictions with the laws of the country and religious teachings will not be disclosed