Rasa - Yemeni tribes in different provinces have joined forces to counter the deadly Saudi aggression against their country, vowing revenge for the blood of the innocent. 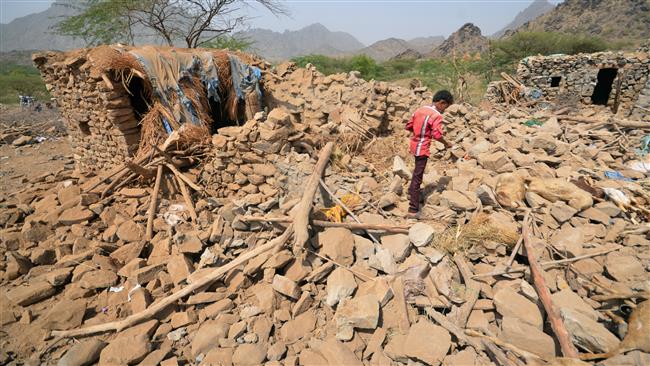 RNA - In the northwestern province of Hajjah, the tribes of the Sharafein district expressed their readiness to deploy forces to the battleground in response to a call issued by the tribes of Khulan and Sanhan, Yemen’s al-Masirah television reported on Saturday.

Bani Sara tribe in al-Shaqadreh also said that it was prepared to team up with Khulan al-Tayal tribe to score a victory against the Riyadh regime and take revenge for the recent Saudi carnage in the capital, Sana’a, which was denounced by rights groups as a war crime.

Sana’a saw one of the deadliest Saudi attacks on October 8, when the regime’s warplanes bombarded a funeral hall packed with mourners in the capital city, killing more than 140 people and injuring at least 525 others.

The tribe of Sanhan in Sana’a put 300 troops equipped with arms on alert.

Additionally, members of the Azla al-Zabareh tribe from different areas and villages took part in a summit, while uts armed forces strongly condemned the US-Saudi crimes in Yemen and said they are ready to go to battlegrounds.

Also in Ibb Province, the residents of the Sabrah region said that they are set to unite other tribes in their resistance against the Saudi military campaign.

Meanwhile, sheikhs and renowned figures of the Mansuriyah region of Hudaydah province and its tribal members came together and underlined the need for deploying new troops to the front line. They also described the Saudi attacks on civilians as a sign of the regime’s weakness.

Saudi Arabia has come under international opprobrium for the sheer size of the casualties from the war it is leading since March 2015 to crush the Houthi Ansarullah movement and bring back the former Yemeni government to power.

The offensive has so far killed 10,000 amid countless reports suggesting deliberate and indiscriminate targeting of civilian infrastructure by Saudi jets and mercenaries.

On Saturday, more than 80 people were killed as Saudi fighter jets carried out a series of air raids on the Yemeni provinces of Hudaydah, Ta’izz and Sa’ada.

The fatal Saudi campaign has been met with a firm response from Yemeni army forces and allied Houthi fighters.

Also, a unit of the Yemeni army fired rockets at places of gathering of the Saudi soldiers and their military equipment in several military bases in the Saudi southwestern regions of Jizan, Najran and Asir.

The attacks left a number of Saudi troopers dead and destroyed their vehicles.

Tags: Yemen Saudi
Short Link rasanews.ir/201mTb
Share
0
Please type in your comments in English.
The comments that contain insults or libel to individuals, ethnicities, or contradictions with the laws of the country and religious teachings will not be disclosed