Rasa - Saudi Arabia is conducting “deliberate” attacks against Yemeni civilians with the purpose of breaking down their resistance, says Hossein Jaberi Ansari, the Iranian deputy foreign minister for Arab and African affairs. 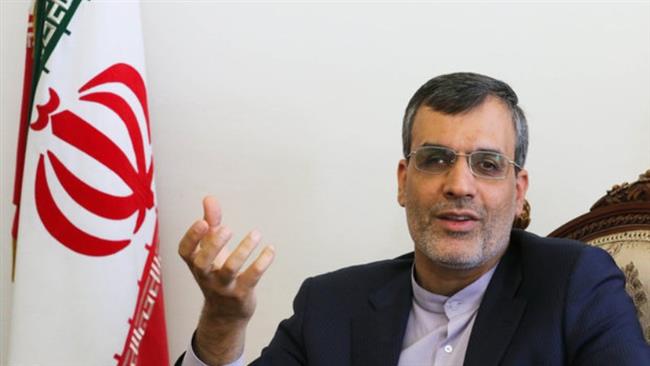 RNA - “Saudis’ attacks on Yemeni civilians and infrastructures are a deliberate move in order to break down resistance of the country’s people,” Jaberi Ansari said in a meeting with Switzerland's State Secretary in the Federal Department of Foreign Affairs Yves Rossier in Tehran on Saturday.

“Such measures and complete economic blockade [of Yemen] will not fulfill the aggressors’ objectives,” the top Iranian diplomat added.

He also pointed to the alleged shooting of missiles at a US Navy destroyer in the Red Sea off the coast of Yemen, saying, “It is possible that the move was carried out by the opponents of the Sana’a government with the aim of preparing the ground for the US military intervention in Yemen.”

US officials said the USS Mason, which was accompanied by the USS Ponce transport dock, came under a missile attack as it was operating north of the Bab el-Mandeb Strait on October 12.

However, none of the missiles hit the ship or caused any damage, the officials added, claiming that the attacks were launched from a territory in Yemen controlled by the Houthi Ansarullah fighters.

An unnamed military official allied with the Houthi movement rejected as “baseless” the US claims, saying Pentagon's accusations were an attempt to provide a pretext for the intelligence and logistics support it has provided to Saudi Arabia in its military campaign against Yemen.

“Such claims aim to create false justifications to step up attacks and to cover up for the continuous crimes committed by the Saudi coalition against the Yemeni people,” said the Yemeni official.

“Security of the international waterway of Bab el-Mandeb Strait is important for us and must be respected by all sides,” the Iranian official said.

He also called for serious talks in Yemen by observing the rights of all the warring sides.

Saudi Arabia has been waging war on Yemen since March 2015. The war was launched in an unsuccessful attempt to reinstate Abd Rabbuh Mansur Hadi, who has resigned as Yemen’s president.

The war has killed at least 10,000 people, amid countless reports suggesting the deliberate and indiscriminate targeting of civilian infrastructure by Saudi forces and mercenaries.

The Swiss official, for his part, said the Yemeni crisis must be solved through political approaches.

Rossier is in Tehran to hold talks with senior Iranian officials on the latest developments in the Middle East, particularly in Yemen, Syria and Iraq.

Tags: Yemen Saudi
Short Link rasanews.ir/201mTO
Share
0
Please type in your comments in English.
The comments that contain insults or libel to individuals, ethnicities, or contradictions with the laws of the country and religious teachings will not be disclosed