Rasa - Volunteer fighters from Iraq’s Popular Mobilization Units say they will join the Syrian government and its allies in the ongoing fight against terrorists. 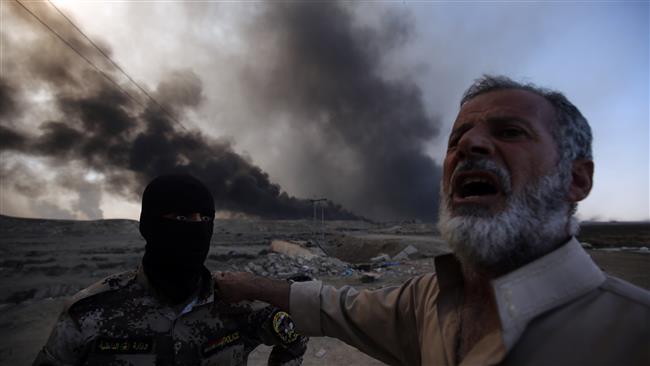 RNA - A spokesman for the forces said on Saturday that they plan to cross the border into Syria to fight alongside President Bashar al-Assad after clearing northern Iraqi territories from the Daesh Takfiri terrorist group.

"After clearing all our land from these terrorist gangs, we are fully ready to go to any place that contains a threat to Iraqi national security," Ahmed al-Asadi said during a briefing with journalists in the Iraqi capital, Baghdad.

The Popular Mobilization Units, generally known by the Arabic title Hashd al-Shaabi, are currently contributing to Iraqi military’s large-scale operation to liberate the northern Iraqi city of Mosul from Daesh. The Shia fighters have announced that they would mostly help the drive around Mosul and not enter the city to avoid accusations of sectarianism.

The volunteer forces on Saturday began an offensive west of Mosul to cut supplies between the city and Raqqah, the de facto capital of Daesh in Syria, to tighten the siege against the militants and liberate the town of Tal Afar.

The forces have played a major role in previous offensives against Daesh in central and western parts of Iraq. The group’s members have already fought alongside Syrian forces against various terror groups, but the Saturday announcement could formalize their involvement in Syria.

Over the past months, Syria has managed to recapture swathes of land from Daesh and other groups in east and north of the country. During the nearly six-year battle, the Syrian military has heavily relied on fighters from Lebanese resistance movement, Hezbollah, as well as advisory military support from Iran. Russia also helps Syria in the fight against terrorists through a series of coordinated airstrikes on their positions.

Tags: Syria Iraq
Short Link rasanews.ir/201mTE
Share
0
Please type in your comments in English.
The comments that contain insults or libel to individuals, ethnicities, or contradictions with the laws of the country and religious teachings will not be disclosed