Rasa - Saudi Arabia's membership on the United Nations Human Rights Council has been renewed notwithstanding the Saudi regime’s dire rights record inside and outside the kingdom. 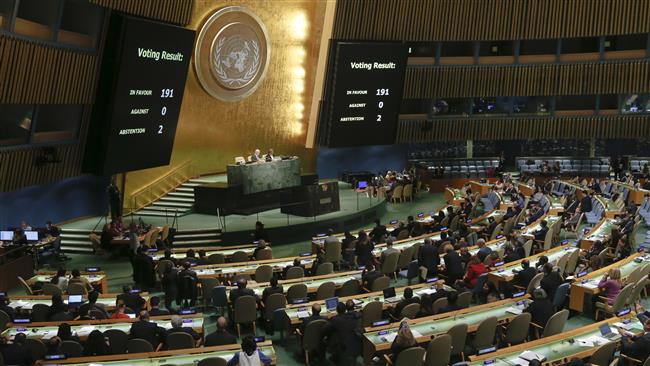 RNA - In a secret balloting process on Friday, the 193-member UN General Assembly elected 14 members to 47-nation council, among them Saudi Arabia. Russia, however, failed to win a seat on the council.

It will be Riyadh’s third term in the UN rights body despite mounting criticism from international human rights groups.

Back in June, Human Rights Watch (HRW) and Amnesty International called on the UN to immediately suspend Saudi Arabia’s membership on its rights council due to its appalling rights record.

“Saudi Arabia has amassed an appalling record of violations in Yemen while a Human Rights Council member, and has damaged the body’s credibility by its bullying tactics to avoid accountability,” said Philippe Bolopion, deputy director for global advocacy at HRW.

The rights groups, however, failed in the campaign to stop Saudi Arabia from being re-elected.

Additionally in June, the UN blacklisted Saudi Arabia after concluding in a report that Riyadh was responsible for 60 percent of the 785 deaths of children in Yemen last year.

A few days later, however, the world body removed the kingdom from the blacklist, citing threats by the regime and its allies to cut off funding to many UN programs. The move triggered an outcry from human rights groups.

On October 8, in one of the deadliest attacks Yemen, Saudi warplanes bombarded a funeral hall packed with mourners in Sana’a, killing over 140 people and injuring at least 525 others.

HRW said that the Sana’a bombing constitutes an apparent war crime, while Amnesty International said the attack was a reminder of the need for the suspension of arms sales to Saudi Arabia.

The country is also under fire for its high number of executions within its borders. Saudi Arabia has also disappointing women's rights record.

It is the only country in the world that prohibits women from driving. The ban stems from a religious fatwa imposed by Wahhabi clerics. If women get behind the wheel in the kingdom, they may be arrested, sent to court and even flogged.

Late last month, thousands of Saudis have signed a petition calling on Riyadh to treat women as full citizens by recognizing their complete rights and ending the controversial male guardianship system.

Tags: HRW Yemen Saudi
Short Link rasanews.ir/201mT9
Share
0
Please type in your comments in English.
The comments that contain insults or libel to individuals, ethnicities, or contradictions with the laws of the country and religious teachings will not be disclosed