Rasa - The families of Turkish citizens killed during a 2010 Israeli raid on an aid flotilla heading to the Gaza Strip say they would not give up their legal case despite Ankara-Tel Aviv normalization of ties. 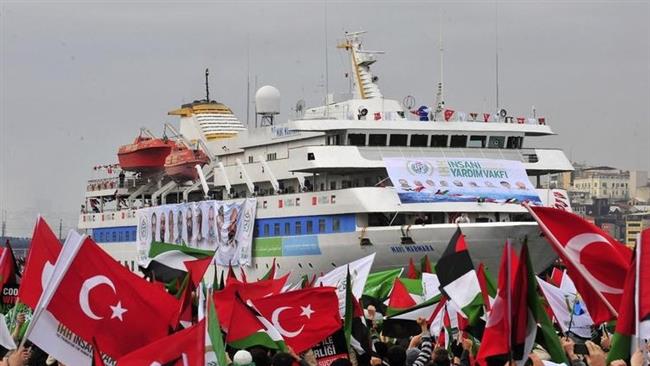 RNA - The vessel was attempting to break the Israeli naval blockade of the enclave when Israeli commandos raided it, killing nine activists. A tenth Turkish national succumbed to his injuries three years later.

They told the AFP news agency that they will not drop the cases even as a reconciliation deal, announced by Ankara and Tel Aviv back in June, normalized bilateral relations which had been damaged by the raid.

Turkish prosecutors are seeking life sentences for the former Israeli officials, whom an Istanbul court tried in absentia in 2012. The court held another hearing in the trial on October 19, though it was later adjourned to December 2.

The deal, however, prevents individual Israelis or those acting on behalf of Tel Aviv from being held liable for the attack, and has had the regime pay out 20 million dollars in compensation to the survivors.

No compensation received by the families

Turkish officials confirmed that the money had been transferred to the Turkish Justice Ministry account last month.

The families, however, say they have not been informed of any details of the deal and have not received any money. Some have even said they would not take the money, even if it was to be offered to them.

Referring to the deal between Ankara and Tel Aviv, Human rights lawyer Rodney Dixon said it “is not a treaty that is enforceable. It is unlawful under international law, under the convention on human rights and Turkish law.”

“Nobody from the Turkish government asked our opinion before they struck a deal,” Ismail Songur, whose father died in the raid, said.

“Unfortunately, the Turkish government is becoming a part of the lawlessness carried out by Israel,” he added.

Cigdem Topcuoglu, an academic from southern Adana Province whose husband was killed in the raid, said, “We are certainly not accepting the compensation.”

“They will come and kill your husband next to you and say, ‘Take this money, keep your mouth shut and give up on the case.’ Would you accept that?”

The agreement also forwent a main condition Ankara had set for the normalization of the ties, namely Israel’s lifting of the blockade on the Gaza Strip.

Tags: Israel Gaza
Short Link rasanews.ir/201mT4
Share
0
Please type in your comments in English.
The comments that contain insults or libel to individuals, ethnicities, or contradictions with the laws of the country and religious teachings will not be disclosed