Volunteer fighters from Iraq’s Hashd al-Shaabi, also known as the Popular Mobilization Units, have begun an offensive to take back Mosul from Daesh terrorists. 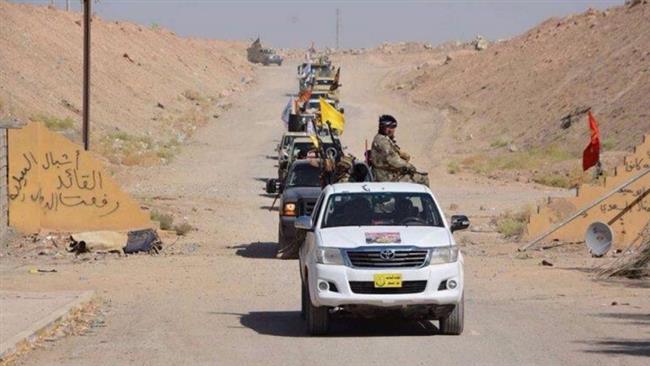 RNA - Ahmad al-Assadi, a spokesman for the forces, said Saturday the operation aims to cut supplies between Mosul and Raqqah in Syria and tighten the siege against Daesh and liberate the town of Tal Afar.

The operation is part of a large-scale offensive which the Iraqi army, volunteer Shia and Sunni fighters, and Kurdish forces launched last week to retake Mosul.

The offensive, however, had left the western part of Mosul on the Turkish border open, potentially enabling Daesh terrorists to move to neighboring Syria as Iraqi forces close in from the north, east and south.

Iraqi sources had earlier reported that the terrorists were leaving Mosul in droves and heading to Syria. Now with the start of operations by Hashd al-Shaabi fighters in western Mosul, the city has come under a full siege.

So far, troops have liberated nearly 80 towns and villages since they began the decisive battle last week.

In Nineveh Province, at least four Iraqi soldiers were killed in airstrikes carried out by the US coalition, which targeted their position in the Talkif district on Saturday.

The United States and some of its allies have been carrying out airstrikes in Iraq since June 2014 allegedly targeting Daesh terrorists in the northern and western parts of the Arab country.

Meanwhile, at least 10 people have been killed in the latest series of bomb explosions in the Iraqi capital, Baghdad.

On Saturday a bomber targeted a mourning ceremony for the third Shia Imam, Imam Hussein (PBUH), killing eight people and wounding 17 others.

Two people were also killed and six others sustained injuries in a booby trap explosion near a market north of Baghdad.

No individual or group has claimed responsibility for the attacks yet, but the Takfiri Daesh terrorist group is highly suspected.

Separately, in western Anbar Province, an Iraqi soldier, who had been unable to see his family for three years after Daesh took control of his hometown of al-Baghdadi, has reunited with his family.

Video of his reunion with his family after three years has gone viral on the Internet.

Walid has participated in a recent operation by the Iraqi forces to liberate the town.

Tags: Hashd Al-Shaabi Mosul Iraq
Short Link rasanews.ir/201mT3
Share
0
Please type in your comments in English.
The comments that contain insults or libel to individuals, ethnicities, or contradictions with the laws of the country and religious teachings will not be disclosed