Rasa - We all know that the United States, Britain, France, Russia, China, Pakistan, India and Israel possess over 25,000 nuclear weapons. They say they will keep hold of their arsenal and therefore their deterrent. 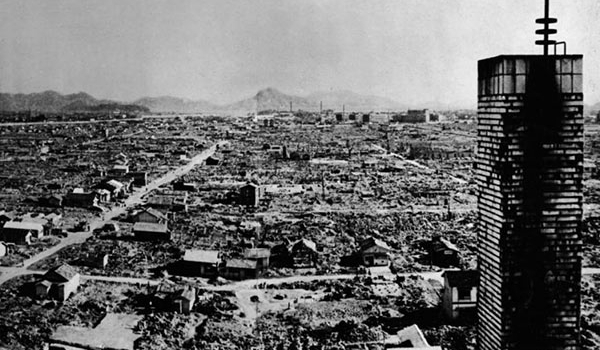 RNA - Some of these regimes continue to rely on nuclear weapons for their security, while others seek them to dominate their neighbours or gain and maintain great power status. Should they be banned, or should we accept reality and learn to "love the bomb?"

Practically speaking, the United States, Britain, France, and Russia “love the bomb” and say the rest of the world should accept this reality. To substantiate, on Thursday, October 27, the self-appointed bully-boy members of the UN Security Council joined 34 other countries and voted against a motion at the UN General Assembly committee to launch negotiations on a treaty that would outlaw the production, stockpiling and use of nuclear weapons.

A total of 16 countries, including China, India and Pakistan that have relatively small but growing nuclear arms programs, abstained from voting. The resolution, presented by Austria, Ireland, Mexico, Nigeria, South Africa and Brazil, was finally adopted as 123 countries voted in its favour, including Iran.

The non-binding resolution will now be put to a full General Assembly vote in late November or early December. It aims to convene a conference in March next year to discuss a “legally binding instrument to prohibit nuclear weapons, leading towards their total elimination.” The resolution also points to the grave concern over the “catastrophic humanitarian consequences of any use of nuclear weapons.”

The whole thing is really self-explanatory: The entire point of nuclear weapons is their massive, indiscriminate destructive power. They are not a defence but a tool for future aggression and preemptive action. Their use could kill hundreds of thousands of civilians directly, and their catastrophic environmental after-effects would harm many more all around the world for decades to come. These effects could never be morally acceptable, particularly as the basis of one’s national security strategy. They place humanity and most forms of life in jeopardy of annihilation.

The problem with this latest resolution, however, is that without support from all its members, including the declared nuclear weapon states which possess veto at the Security Council, the UN cannot take practical action. Therefore, the declared nuclear weapon states need to take the lead in disarmament, as an example for the rest of the world. They must accept that their years as nuclear powers are now over and replenish their nuclear arsenal, knowing that were any other country to launch a military attack on them, the UN would step up to the task.

The declared nuclear weapon states need to increase their moral authority if we are going to prevent a global nuclear catastrophe becoming a reality. This is particularly true for the United States, as the only country to ever use nuclear weapons (in World War II) and as a country that has recently stated its willingness to use nuclear weapons to advance its regime change agenda in the Middle East and North Africa.

In closing, it is important to remember that nuclear weapons don't protect against other nuclear attacks, only anti-nuclear defenses do this. The idea of a so-called “nuclear deterrent” no longer applies. There is no longer a balance of power in the world. It only encourages the proliferation of Weapons of Mass Destruction.

Tags: Nuclear Bomb
Short Link rasanews.ir/201mT2
Share
0
Please type in your comments in English.
The comments that contain insults or libel to individuals, ethnicities, or contradictions with the laws of the country and religious teachings will not be disclosed