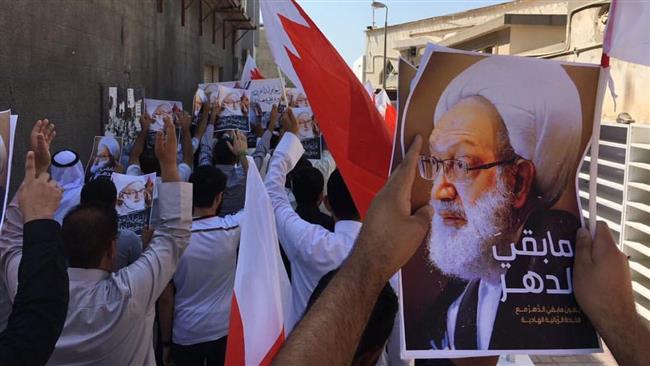 RNA - Demonstrations were held in the villages of Diraz, Shakhoura and Abu Saiba on Friday.

The protesters denounced the Al Khalifah regime for stripping Sheikh Qassim of citizenship and the continued persecution of the Shia community in Bahrain.

Manama has kept in place a ban on holding Friday prayers in the village of Diraz, which is also the hometown of Qassim.

Similar protests were also held in the town of A'ali and the villages of Ma'ameer and Maqsha, where the demonstrators voiced support for the cleric.

In June, authorities in Manama revoked the nationality of Sheikh Qassim, about a week after Bahrain suspended the activities of the main Shia opposition group al-Wefaq National Islamic Society, whose secretary general, Sheikh Ali Salman, himself a prominent Shia cleric, has been in prison since December 2014.

Chanting slogans against the regime, the protesters on Friday called for the release of Sheikh Qassim and other political detainees.

Since mid-February 2011, thousands of anti-regime protesters have held numerous demonstrations on the streets of Bahrain, calling for the Al Khalifah family to relinquish power.

Scores of people have been killed hundreds of others injured and arrested in the ongoing crackdown on peaceful rallies.

Tags: Issa Qassem protest bahrain
Short Link rasanews.ir/201mT0
Share
0
Please type in your comments in English.
The comments that contain insults or libel to individuals, ethnicities, or contradictions with the laws of the country and religious teachings will not be disclosed