Rasa - Russian Foreign Minister Sergei Lavrov has warned that Daesh terrorists are leaving the northern Iraqi city of Mosul in droves and heading to neighboring Syria, voicing Moscow’s eagerness to work with the Iraqi government to stop the exodus. 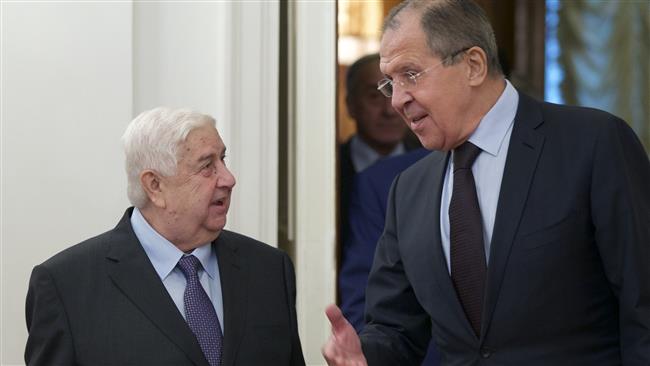 RNA - “The international anti-Daesh coalition has launched the operation to liberate Mosul. We are interested in working with our Iraqi colleagues to take measures to prevent terrorists moving from Mosul to Syria with their heavy arms, which of course will seriously worsen the situation in the Syrian republic,” Lavrov said at a joint press conference with his Iranian and Syrian counterparts Mohammad Javad Zarif and Walid al-Muallem respectively in Moscow on Friday.

He added, “We think that it is important not to let this happen. We will discuss it with the US and other members of the coalition. We cannot let the terrorists leave Mosul into Syria with the aim to re-directing their activity.”

Last week, the Russian Defense Ministry asked the US-led military coalition not to "drive terrorists" from Iraq to Syria during the offensive to liberate Mosul.

Iraq’s Joint Operations Command (JOC) announced on Thursday that a total of 772 Daesh terrorists have been killed and 23 others arrested in the operation so far.

The Syrian foreign minister, for his part, stated that the so-called US-led military coalition plans to salvage Daesh, and move the terrorists from Mosul to al-Raqqah, which serves as their stronghold in Syria.

“Lavrov pointed out that Mosul and the liberation operation around the city suffered from the intervention of the US-led coalition and from the US guidance. This coalition has never fought Daesh. On the contrary, it is destroying the infrastructure of the Syrian economy, and recently destroyed a huge number of bridges on the Euphrates River. It is them who do not want to destroy Daesh. They want to move Daesh from Mosul into Raqqah. I was glad to hear that we will continue our cooperation to prevent this (from happening),” Muallem said.

Lavrov then pointed out that Moscow and Tehran support “the readiness of the Syrian government to continue and even expand cooperation with the UN in resolving the humanitarian issues.”

The top Russian diplomat, however, made it clear that “UN representatives should be impartial, not respond to provocations, as an international organization should be.”

Muallem also questioned the ongoing US-led airstrikes against purported Daesh positions in Syria, stressing that the aerial attacks have failed to dislodge the terrorists.

The Syrian foreign minister further dismissed allegations of contacts between the US-led coalition and Syrian government, saying, “All these conversations might prove as useful for the US administration before the US presidential vote. But we do not believe this and there are no contacts between us anyway.”

The foreign-sponsored conflict in Syria, which started in March 2011, has claimed the lives of more than 400,000 people, according to an estimate by UN Special Envoy for Syria Staffan de Mistura.

Tags: DAESH Syria Russia Iraq
Short Link rasanews.ir/201mSy
Share
0
Please type in your comments in English.
The comments that contain insults or libel to individuals, ethnicities, or contradictions with the laws of the country and religious teachings will not be disclosed