Rasa - Dozens of Rohingya Muslim women in Myanmar’s Rakhine state say government forces have committed acts of rape or sexual assault against them. 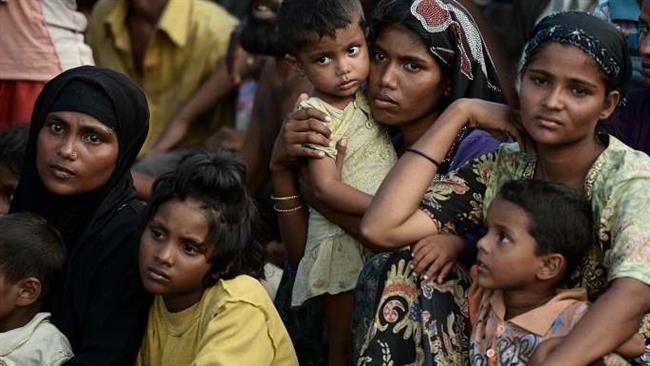 RNA - Eight Rohingya women, all from the remote U Shey Kya village, described in detail how soldiers last week raped them at gun point, while raiding their homes and looting property, according to Reuters news agency on Friday.

Myanmar deployed troops to Rakhine earlier this month following alleged attacks on police posts along the border with Bangladesh, which authorities blamed on Rohingya Muslims.

One 40-year-old woman said four soldiers raped her and assaulted her 15-year-old daughter, while stealing jewelry and cash from the family.

“They took me inside the house. They tore my clothes and they took my headscarf off…,” she said.

Another woman, 32, described being knocked off her feet by soldiers and repeatedly raped. “They told me, ‘We will kill you. We will not allow you to live in this country,’” she said.

The women said the soldiers took gold, money and anything that was valuable from their bamboo huts and burned down village homes and spoiled rice stores by pouring sand on them.

One 30-year-old woman said he did not have clothes or food to eat after everything was destroyed. "I’m feeling ashamed and scared,” Reuters quoted the unnamed woman as saying.

Five more women from U Shey Kya also detailed how soldiers had raped them. The accounts were confirmed by at least three male residents of the village and a Rohingya community leader.

U Shey Kya village’s official administrator, Armah Harkim, said he was verifying the accounts which most residents believed to be true. The residents said about 150 soldiers attacked U Shey Kya on October 19.

A presidential spokesman accused the villagers of fabricating the news while confirming that government troops had conducted a sweep of the village on October 19.

Most male residents have reportedly left the village as they believed they would be suspected as militants. The women said they stayed behind fearing that the military would burn down empty homes.

Residents said the soldiers dismantled the fences around the houses after the military declared northern Rakhine State an “operation zone.”

The UN has called on Myanmar to investigate new reports of human rights violations, including the killing of unarmed people and torching of rural settlements in Rakhine state.

Rights groups say troops have gone on a rampage, which has forced terrified civilians to flee their homes.

Rakhine, where Rohingya Muslims form the majority population, has been the scene of communal violence at the hands of Buddhist extremists since 2012.

Hundreds of people have been killed, while tens of thousands have been forced to flee their homes and live in squalid camps in dire situations in Myanmar and other countries in Thailand, Malaysia and Indonesia.

According to the UN, Rohingyas are one of the most persecuted minorities in the world. The government denies full citizenship to Rohingya population, branding them illegal immigrants from Bangladesh, even as many trace their lineage in Myanmar back generations.

Tags: Rohingya Myanmar
Short Link rasanews.ir/201mSj
Share
0
Please type in your comments in English.
The comments that contain insults or libel to individuals, ethnicities, or contradictions with the laws of the country and religious teachings will not be disclosed