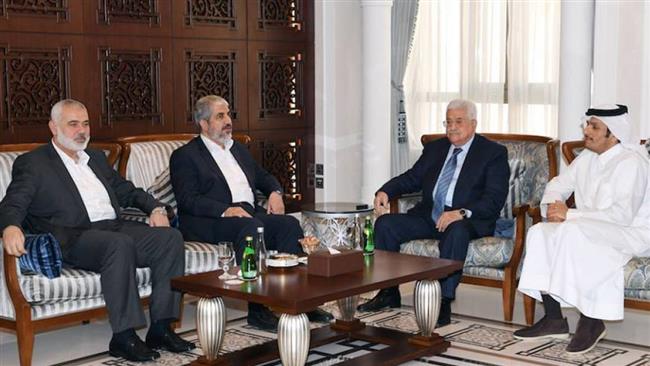 The two sides discussed how to ease the woes of the Palestinians and how to bridge the rift between Hamas and President Abbas’ Fatah Party.

Hamas said in a press release that its leaders stressed the need to implement the previous reconciliation agreements signed between the two sides over the past few years.

Hamas’ leaders also called for holding elections and forming a unity government. They also suggested that a united Palestinian front be formed in a bid to confront the Israeli occupation agenda and its continued aggression.

According to the Palestinian Authority’s official Wafa news agency, the trio emphasized reconciliation and the importance of dialog between Fatah and Hamas to achieve unity, establish a consensus government, and organize elections.

The sides agreed to protect the “Palestinian national project” from Israeli attempts to destroy the two-state solution, it added.

In April 2014, Hamas and Fatah agreed to set aside their differences and formed a unity government. The joint national consensus government was, however, dissolved in June 2015 amid persisting differences between the two factions.

The two key rival factions have had tense relations since Hamas scored a major victory in Palestinian legislative elections in 2006 and emerged the ruling party in the Israeli-besieged Gaza Strip.

Tags: Hamas Qatar Palestine
Short Link rasanews.ir/201mSi
Share
0
Please type in your comments in English.
The comments that contain insults or libel to individuals, ethnicities, or contradictions with the laws of the country and religious teachings will not be disclosed