Rasa - Sowing the seeds of hate once again is Oklahoma’s own state legislator John Bennett, a far-right Republican from Sallisaw. 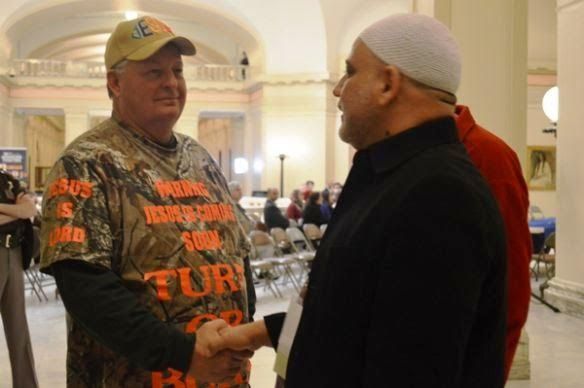 RNA - Bennett, along with others, met at the State Capitol to discuss the “threat” of radical Islam by the Oklahoma City chapter of the Muslim civil-rights group the Council on American-Islamic Relations (CAIR-OK).

During his inquisition of fear and loathing, Bennett told those in attendance at the meeting that he will be drafting legislation meant to kick “these terrorist organizations out of the state of Oklahoma…”

Other state legislators included at the meeting included Randy Grau of Edmond and Bobby Cleveland of Slaughterville. Both are Republicans, interestingly enough.

The people of Oklahoma should not only be asking why their elected representative has it in for the Muslim community but they should also be asking why is wasting taxpayer resources to conduct interim studies and personal attacks that only serve to foster hate against Oklahoma’s Muslim community.

Why is latter-day Joe McCarthy squandering the State Capitol’s time and resources on hate speeches when Oklahoma has real problems?

The past few years, Bennett has been in the news primarily promoting his openly hostile, anti-Muslim agenda. He was quoted at one time as saying that Muslims are “a cancer that needs to be cut out of the nation.”

Bennett is playing on the fears that Oklahomans have toward Muslims due to violence conducted by radical groups like ISIS. In his meeting, he claimed that CAIR-OK is directly funding groups such as Hamas and the Muslim Brotherhood and thus is a direct sponsor of terrorism. His goal is to remove the organization from Oklahoma in order to protect the people.

It is Mr. Bennett himself that the people of Oklahoma need protection from. It is this sort of behavior by an elected official that is shameful and embarrassing to our state.

Tags: CAIR ISIS Radical
Short Link rasanews.ir/201mSc
Share
0
Please type in your comments in English.
The comments that contain insults or libel to individuals, ethnicities, or contradictions with the laws of the country and religious teachings will not be disclosed