Rasa - Bahrain’s King Hamad bin Isa Al Khalifah has received an angry greeting in London, with protesters condemning the ruling Al Khalifah regime for its crackdown on dissent in the Persian Gulf kingdom. 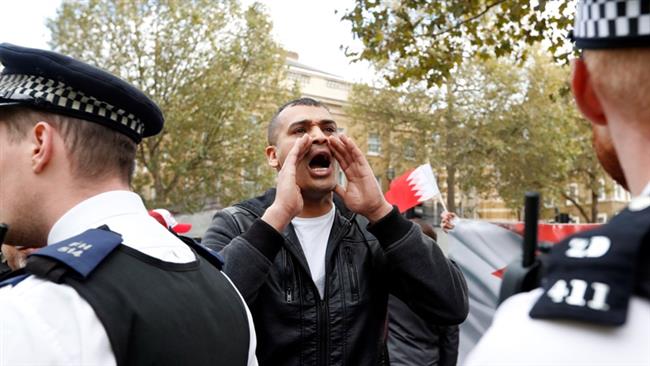 RNA - The protest erupted as the Bahraini ruler arrived to meet British Prime Minister Theresa May in London on Wednesday.

Protesters chanted anti-government slogans and demanded the Manama regime be investigated for its rights abuses. Some of them threw themselves at a car carrying the king outside Downing Street.

Sayee Alwadaei, one of the arrested activists, told The Middle East Eye that the police “should be investigating the torture allegations coming from Bahrain, the abuses committed by the regime” rather than targeting activists or journalists.

International human rights organization Reprieve also raised concerns about the king's visit, which comes only a week after reports surfaced that the UK was helping to “whitewash” government abuse in Bahrain.

“Britain is deeply involved with Bahrain’s interior ministry at every level. The prime minister cannot wash her hands of torture and death sentences in the kingdom,” said Harriet McCulloch, deputy director of Reprieve's death penalty team.

Campaign groups have called on May to raise concerns about the death penalty and torture in the country, which has received almost £2 million in aid from Britain.

Since February 14, 2011, thousands of anti-regime protesters have held numerous demonstrations in Bahrain on an almost daily basis, calling on the Al Khalifah family to relinquish power.

Manama has relentlessly been cracking down on dissent. Troops from Saudi Arabia and the United Arab Emirates have been deployed to the country to assist in the crackdown on peaceful protests.

Scores of people have been killed and hundreds of others injured or arrested in the Bahraini crackdown on the anti-regime activists.

Tags: UK bahrain
Short Link rasanews.ir/201mSP
Share
0
Please type in your comments in English.
The comments that contain insults or libel to individuals, ethnicities, or contradictions with the laws of the country and religious teachings will not be disclosed