Rasa - At least six children have been killed and over a dozen people injured after Takfiri terrorists launched rocket attacks on a school as well as a house situated in residential areas of Syria’s Aleppo. 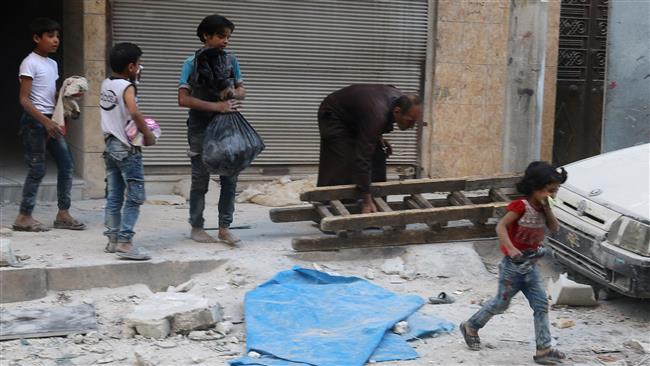 The terrorist groups, who carried out the attack, were positioned in Aleppo’s Zahra neighborhood, the report said, adding that the incident caused material damage to the school building and classrooms.

Another rocket attack also struck a house at the residential Assad suburb in al-Hamadaniyeh neighborhood, killing three brothers and injuring another one.

Aleppo, Syria’s second largest city, remains divided between government forces in the west and foreign-backed terrorists in the east, making it a frontline battleground.

The Syrian army has set up several humanitarian corridors to facilitate the transfer of the civilians caught up in Aleppo’s terrorist-held parts as well as those militants who lay down arms.

However, reports coming out of Aleppo’s occupied regions indicate that the Takfiri groups are blocking the exit of civilians. They are also using people as human shields and threatening those trying to leave.

In another development on Thursday, Syrian President Bashar al-Assad issued a legislative decree, extending for three months the validity of an earlier measure pardoning militants who turn in their weapons.

The order stipulates that the militants who turn themselves in to Syrian authorities, lay down their weapons and release their captives will be granted amnesty.

Additionally on Thursday, the United Nations’ Syria humanitarian advisor said that the Damascus government has approved 23 of 25 proposed areas to receive aid supplies in November, among them 17 besieged regions.

Jan Egeland assured that the world body was “not giving up” on medical evacuations from Aleppo and delivery of food and medical equipment.

Since October 18, Russia and Syria have suspended airstrikes targeting foreign-backed Takfiri terrorists in Aleppo to allow the evacuation of civilians.

Also on Thursday, the European Union added 10 top Syrian officials to its sanctions list over the crisis in Syria.

The bloc said in a statement that those targeted were “high-ranking military officials and senior figures linked to” the Damascus government.

The EU is expected to publish the names of the 10 people sanctioned on Friday.

The move brings to 217 the total number of individuals hit with travel bans or asset freezes. Another 69 entities are also affected by asset freezes, while the bloc also has in place other bans against Syria as a whole, including arms and oil embargoes as well as investment restrictions.

Last week, EU leaders agreed to increase sanctions against the Syrian government over the situation in Aleppo. They further raised the possibility of sanctions against Russia, but the plans were scrapped after sharp differences emerged among EU member states.

Additionally on Thursday, Turkish President Recep Tayyip Erdogan said that the country’s military in neighboring Syria will target the Syrian cities of Manbij and Raqqah after seizing al-Bab.

In a speech in Ankara, which was broadcast live, Erdogan announced that he had informed his US counterpart, Barack Obama, about his plans for the operation in a Wednesday telephone conversation.

“Now we advance towards al-Bab because al-Bab is an important center for them (Daesh terrorists). They will leave al-Bab as well. That is how our fight will continue. Then we will move towards Manbij and Raqqah,” he said.

Turkish special forces, tanks and jets backed by planes from the US-led coalition launched their first coordinated offensive in Syria in August. Damascus has denounced Turkey’s military intervention as a breach of its sovereignty.

Ankara claims the operation, dubbed “Euphrates Shield,” was aimed at “terror groups” such as Daesh and US-backed Kurdish fighters.

Turkey has been part of the US-led coalition purportedly fighting Daesh in Syria.

The mission, which comes without the approval of the Syrian government or a UN mandate, has done little to eliminate the terror groups and has, on numerous occasions, targeted civilians and Syrian infrastructure.

Earlier this week, Amnesty International said that as many as 300 civilians had been killed in 11 attacks conducted by the Washington-led alliance in Syria since September 2014.

The UK-based rights group further urged an investigation into potential violations of international law during the so-called campaign against terror.

Tags: Syria Aleppo
Short Link rasanews.ir/201mSO
Share
0
Please type in your comments in English.
The comments that contain insults or libel to individuals, ethnicities, or contradictions with the laws of the country and religious teachings will not be disclosed