Mosul Is Not a Make or Break Battle for Iraq

Rasa - The long and hard offensive to liberate Mosul could determine the future of ISIL in Iraq. It would also determine the fate of Iraq, but it won't break the country if unsuccessful. 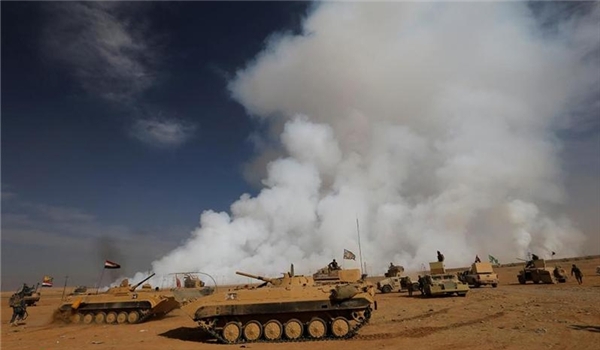 RNA - Mosul is where ISIL ringleader Abu Bakr al-Baghdadi declared his bogus caliphate in 2014, after his alliance with Al-Qaeda and veteran officers from the disbanded army of Saddam Hussein. They roared back into Iraq from bases they set up in the mayhem of America’s war on Syria – admittedly with a helping hand from Saudi Arabia and its regional allies.

Fast forward to 2016, some pundits in the West would like us to believe that if the battle to retake Mosul fails - which is unlikely – all hope is lost, and that Iraq will no longer be able to remain as a unitary state. On the contrary. If the campaign is unsuccessful, Iraqi armed forces have what it takes to launch another campaign. They will fight another day.

Into the argument, the outcome and the political sensitivity with which this battle is handled could determine the future of Iraq, but not what comes next; and there are many other issues that post-ISIL Iraq would have to deal with. They Include Al-Qaeda, Kurdish separatists, US occupation and meddling, Turkish military aggression, and of course the remnants of ISIL and sleeper cells, whatever their terminology, who will continue to rig cities and communities with suicide bombings and explosives, and have every willingness to use civilians as human shields.

Indeed, it is naïve to underestimate the group’s strength and its co-founders’ determination, who depend on experienced former senior Baathist officers, radicals and jihadis willing to blow themselves up to “defend” the Wahhabi ideology and preserve the status quo. Thanks largely to Saudi Arabia and its allies, the terrorist group has a plentiful supply of US-made weapons and ammunition to carry on.

Once Mosul is finished, however, the phoney caliphate they announced is finished, but not its Wahhabi ideology and reign of terror. The terrorist group will go back to more asymmetric warfare. We will see suicide attacks in many cities and towns throughout the region and elsewhere. The group will make sure the US-backed campaign to destabilise heartlands of the Muslim world will continue apace.

And that's not all. The extremists, just like their co-founders, will continue to fuel sectarianism and galvanize Sunni Arab opinion against the Shiites, whose allied forces have fielded the most effective ground forces against the death cult. The allied forces are doing everything they can to break the cohesion of ISIL and the allegiance it has coerced among Sunni tribes in Mosul and beyond.

The Mosul offensive, therefore, is an important battle for Iraq and the world. What happens next will shape Iraq. The Iraqi government is doing a great job fixing the political peace the day after liberating Mosul. This multi-ethnic, multi-sectarian city will be governed and run by its own Sunni local communities without any displacement of people. What's more, there will be a strong representative governance in the city by other ethnic groups.

The battle against ISIL and other extremist outfits in the region will not end with the liberation of Mosul. Mosul is not the end of ISIL or its co-founders in the region, much less their extremist, Wahhabi ideology. And the world will never see peace again unless a global crackdown on Wahhabism as the root cause of the security problem in the region and the world today, an ideology that not just allows, but promotes the most barbaric actions against the human race unless you are a zealot brother in arms. This is a danger that even General Sisi of Egypt, a once very close ally of the Wahhabist rulers of Riyadh, has now come to realize and sense, and that's why he strongly condemns the militants in Syria, calling them head-chopping terrorists, and that's why he has strongly refused to send ground troops to the Saudi-led incursion into Yemen despite the fact that you find the name of his country among the Saudi-led coalition members that have promised assistance to the House of Saud in its war on Yemen. Smart, farsighted states have or will follow suit before the savage ideology strikes at them. China has also sensed the danger and that's why it has taken to supply hi-tech weapons systems like fighter jets to Syria and is said to be considering military buildup there. You don't have to be targeted by the terrorists to make a sober decision to join the true war on terrorism. It's just a bit of a surprise why the European states who have been repeatedly beaten by the ideology are reluctant to take action, political or military, against the cradle of Wahhabi terrorism. The renowned German weekly, Spiegel, once very correctly said: Saudi Arabia, a country that has only three products to export: crude, date and terrorism.

Tags: ISIL Mosul Iraq
Short Link rasanews.ir/201mS6
Share
0
Please type in your comments in English.
The comments that contain insults or libel to individuals, ethnicities, or contradictions with the laws of the country and religious teachings will not be disclosed