Rasa - The Yemeni army and popular forces pushed back an attack by pro-Saudi troops to advance towards a strategic region in Sana'a province on Wednesday, inflicting heavy losses on them. 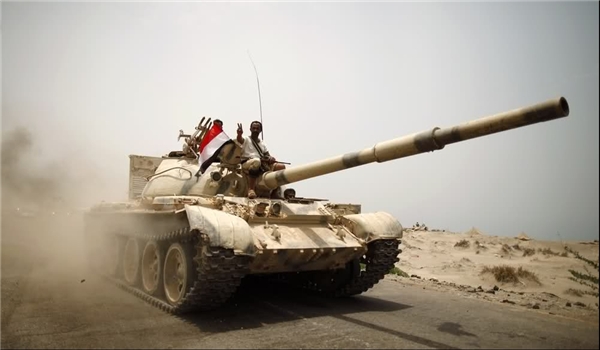 RNA - The Yemeni forces managed to drive back the pro-Saudi forces that were backed by the kingdom's fighter jets, stopping their advance towards al-Houl district in the Ninth district of Sana'a province.

In Ta'iz province, the Yemeni army hit a gathering center of the terrorists in al-Jamila region in a missile attack which resulted in the death and injury of several pro-Saudi forces.

In al-Jawf province, the Yemeni army's artillery units hit the Saudi mercenaries in al-Khanjar region near Khob and al-Sha'af regions, inflicting several casualties on them.

On Sunday, the Yemeni army and popular forces hit hard the gathering centers of the Saudi troops in Southern Saudi Arabia with Katyusha rockets, inflicting heavy losses on the Kingdom's army.

"The Yemeni forces hit the gathering centers of the terrorists in al-Raheh village in Jizan province on Sunday morning," the Arabic-language al-Massira new channel quoted a military source as saying.

The Saudi forces sustained heavy casualties in the Yemeni rocket attacks on their positions in Jizan province.

The pro-Hadi militias' military positions to the South of Kahboub region in Lahij province came under the Yemeni forces' mortar attacks as well.

The Yemeni attacks came in response to the Saudi airstrikes on the civilian population across the impoverished nation, including Sana'a, Ta'iz, al-Hudayda and Hajjah provinces.

On Saturday, senior Yemeni commanders announced that their forces had captured a Saudi military base with all its weapons and ammunition inside Saudi Arabia.

"The Yemeni special forces attacked a Saudi military base in the Eastern side of Najran and captured the military base after fierce clashes which lasted over three hours," senior Ansarullah commander Ali al-Hamzani told FNA.

He noted that the tribal leaders in Najran have warned against the dangerous security conditions in their province and called on the Riyadh government to drive out the al-Qaeda terrorists from Najran soon.

"This is while Saudi Arabia has intensified sectarian differences in Najran through reinvigorating the Takfiri terrorists in the region," al-Hamzani said.

Saudi Arabia has been striking Yemen since last March to restore power to fugitive president Mansour Hadi, a close ally of Riyadh. The Saudi-led aggression has so far killed at least 11,800 Yemenis, including hundreds of women and children.

Tags: Yemen Saudi
Short Link rasanews.ir/201mS2
Share
0
Please type in your comments in English.
The comments that contain insults or libel to individuals, ethnicities, or contradictions with the laws of the country and religious teachings will not be disclosed