Rasa - Yemeni army soldiers, supported by fighters from Popular Committees, have established control over a military base in Saudi Arabia’s southwestern border region of Najran as they continue their retaliatory raids against Riyadh’s military. 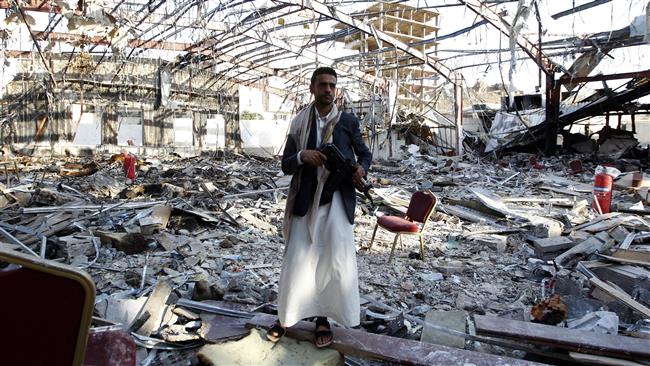 Saudi soldiers at the site can be seen retreating, with scores of them lying injured on the ground as Yemeni forces advance.

Yemeni forces then destroyed an armored vehicle and a battle tank at the military site before confiscating a considerable amount of rifles and military equipment.

Shortly afterwards, Yemeni soldiers and Popular Committees fighters seized the watchtower of the base, and detonated it using explosive charges.

Yemeni sources said Saudi military helicopters fired a number of missiles during the attack on Alib base, but the projectiles failed to strike targets and mishit.

A Saudi unmanned aerial vehicle was reportedly hovering the skies over Alib base at the time, monitoring the movements of Yemeni army forces and Popular Committees fighters.

Early on Wednesday, Yemeni army forces and fighters from Popular Committees repelled an offensive by militiamen loyal to resigned president Abd Rabbuh Mansur Hadi in the Hayfan district of the southwestern province of Ta'izz.

There were no immediate reports about possible casualties within the ranks of Saudi-backed mercenaries.

Saudi fighter jets also bombarded Madfoun and al-Houl areas in Nihm district of the northern province of Sana’a, but no reports of fatalities and the extent of damage were quickly available.

Additionally, Saudi warplanes struck areas in the city of Sirwah, which lies about 120 kilometers east of the capital Sana’a, besides two other airstrikes against al-Dawar area in the Mustaba district of the northwestern Hajjah Province.

Saudi Arabia has been engaged in the deadly campaign against Yemen since March 2015 in an attempt to bring back the former Yemeni government to power and undermine the Houthi Ansarullah movement.

The UN puts the death toll from the military aggression at about 10,000.

Tags: Yemen Saudi
Short Link rasanews.ir/201mS1
Share
0
Please type in your comments in English.
The comments that contain insults or libel to individuals, ethnicities, or contradictions with the laws of the country and religious teachings will not be disclosed