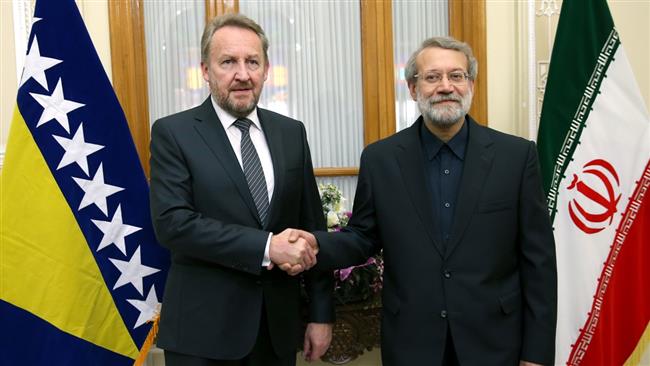 RNA - “The pace of terrorist events in the region is higher than political solutions and this factor has created obstacles in the way of the resolution of the issue,” Larijani said in a meeting with the visiting chairman of the Presidency of Bosnia and Herzegovina, Bakir Izetbegovic, in Tehran on Tuesday.

He added that terrorism poses a threat to the security of all countries as acts of terror have increased over the recent years, saying, “Terrorism has now turned into a big problem in the region and the world.”

Larijani said efforts made by some countries to use terrorism as a means as well as the existence of an ideological current among a small group of Muslims that nurtures terrorism were two main factors that have helped increase terror attacks.

The top Iranian parliamentarian also stressed the importance of improving political, trade and economic relations between Tehran and Sarajevo to serve the two nations’ interests.

Larijani also threw the Iranian parliament’s weight behind the expansion of bilateral cooperation.

The chairman of the Bosnian Presidency, for his part, said his country believes that terrorism has nothing to do with true Islam and urged all Muslim countries to engage in a joint fight against the malicious phenomenon.

Izetbegovic expressed confidence that Iran, as a stable country and a regional power, can help solve the current issues in the region, saying that the Bosnian government is resolute to counter sectarianism and extremism and has taken positive steps in this regard.

The Bosnian official arrived in Tehran on Monday at the invitation of Iranian President Hassan Rouhani. He held separate talks with Leader of the Islamic Revolution Ayatollah Seyyed Ali Khamenei, the Iranian president, and Chairman of the Expediency Council Akbar Hashemi Rafsanjani on Tuesday.

Also on Tuesday, Iranian and Bosnian officials signed a memorandum of understanding on the promotion of business cooperation and mutual investment in the presence of Rouhani and Izetbegovic.

Tags: Iran Larijani Bosnia
Short Link rasanews.ir/201mRu
Share
0
Please type in your comments in English.
The comments that contain insults or libel to individuals, ethnicities, or contradictions with the laws of the country and religious teachings will not be disclosed