Iran doubts US seriousness in fight against terrorism

Rasa - A senior Iranian lawmaker says the Islamic Republic is skeptical about the earnestness of the United States in the campaign against terrorism in the Middle East. 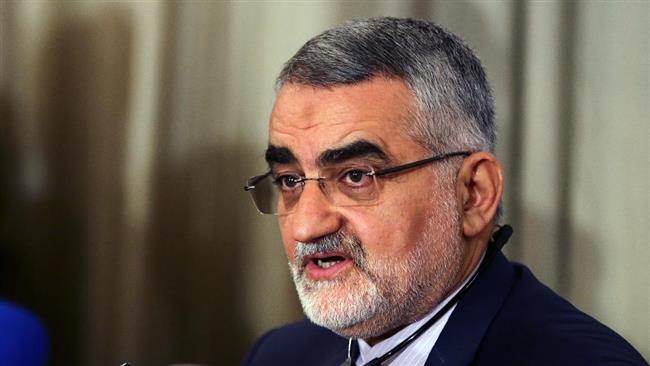 RNA - “We have doubts about US's seriousness in the fight against terrorism. We are witnessing apparently mistaken aerial aid to Daesh and apparently mistaken attacks on the positions of the Syrian Army,” the chairman of the Iranian Parliament's Committee on National Security and Foreign Policy, Alaeddin Boroujerdi, said in a meeting with diplomats, researchers and reporters in Paris on Tuesday.

He added that developments during the Iraqi imposed war on Iran in the 1980s and unfair sanctions against Tehran over its nuclear program taught the Iranians that they should rely on themselves in order to defend the country.

“We are a peaceful nation and bear fundamental opposition to nuclear and chemical weapons and this is while an atomic power exists on our eastern borders and the Zionist regime [of Israel] has some 200 nuclear warheads,” the senior Iranian legislator said.

Boroujerdi further added that relations between Tehran and Paris entered a new phase after a visit by Iranian President Hassan Rouhani to France in January.

“Our policy with regard to Western and European countries is to expand relations based on mutual respect,” he said.

During the Iranian president’s visit to Paris, several memoranda of understanding were signed between Iran and France in various sectors, including telecommunications, environment, tourism, agriculture, higher education and transportation.

Rouhani made the trip following the implementation of a nuclear agreement, known as the Joint Comprehensive Plan of Action (JCPOA), between Iran and the P5+1 group of countries which was signed by the two sides in July 2015.

Under the JCPOA, which took effect on January 16, Iran undertook to put limitations on its nuclear program in exchange for the removal of nuclear-related bans imposed against Tehran.

Tags: US Terrorism Alaeddin Boroujerdi
Short Link rasanews.ir/201mRs
Share
0
Please type in your comments in English.
The comments that contain insults or libel to individuals, ethnicities, or contradictions with the laws of the country and religious teachings will not be disclosed