RNA - Opposition groups disclosed on their media pages on Tuesday that over 155 child soldiers have finished their military courses in an ISIL-held training camp in Raqqa and are to be sent to battlefields in Northern Aleppo. 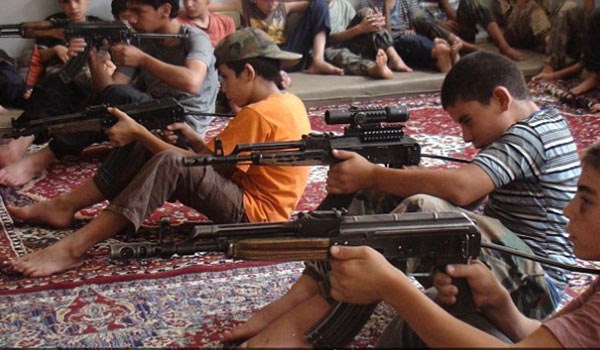 RNA - The Smart news website reported that the first group of child soldiers, who were trained in ISIL's Abu Mohammad al-Adnani Military Camp in the town of al-Tabaqa in Western Raqqa, will join their elder comrades to fight against rival terrorist groups in Northern Aleppo.

Reports said in August that the ISIL was holding thousands of young boys captive in Syria and Iraq, where it was teaching them how to become deadly child soldiers.

The group reportedly gave up on turning adults into terrorists and instead focused on turning out a new generation of what it calls “lion cubs”.

A 14-year-old child who managed to escape from ISIL lands said that the leaders of the group told him and other boys that they should sacrifice everything, even themselves. The child fled when he was ordered to kill his brother.

According to the boy, ISIL thought children on only how to kill their enemies and how to show full loyalty to their commander.

Most of the children are from Syria. Of the 89 cases eulogized by the ISIL in the past 13 months, 39% died detonating a vehicle born IED device and 33% were killed as foot soldiers. Some 4% killed themselves while committing mass casualty attacks against civilians, and 6% died as propagandists embedded with brigades.

In an ISIL video released in 2015, a boy was shown beheading a Syrian soldier under adult supervision.

Tags: Child Soldier Syria ISIL
Short Link rasanews.ir/201mRq
Share
0
Please type in your comments in English.
The comments that contain insults or libel to individuals, ethnicities, or contradictions with the laws of the country and religious teachings will not be disclosed