Rasa - The Iranian foreign ministry welcomed the European Parliament's recent resolution to enhance diplomatic ties with Tehran as part of an ongoing strategy following the Iran Nuclear Agreement of 2015, but meantime, underlined that the country's defense program will never be open to negotiations. 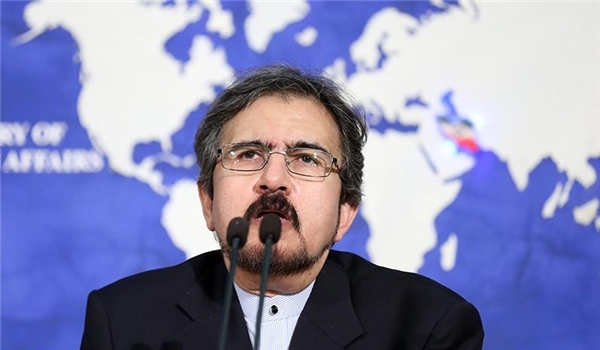 "In addition to admitting the Islamic Republic of Iran's influential international and regional role in the establishment of stability and tranquility in the region, the resolution stresses our country's constructive role in resolving the regional disputes and fighting against terrorism, specially the ISIL and similar groups, and lays emphasis on developing relations in all political, economic, energy, scientific, training, research and environmental fields," he added.

Qassemi, meantime, referred to certain western sides' pressures on Iran to discuss its defense program, and said, "The Islamic Republic of Iran's missile tests are carried out within the framework of the country's defense policies and Iran's defense capabilities are not negotiable and would never be compromised."

He also voiced Tehran's opposition to political and double-standard attitudes towards the human rights issues, and said, "The Islamic Republic of Iran is ready to explain about Islam's views on human rights under a peaceful and non-hostile atmosphere and through talks and exchanging views and it attempts to interact with others to bring the two sides' views closer to each other."

His remarks came as Iran and the EU are due to hold talks on human rights issues with the Iranian officials stressing the need for talks based on mutual respect and equality.

In August, Iran's Judiciary Chief Sadeq Amoli Larijani announced his country's preparedness to hold talks with the European states, and not the US, on human rights issues.

"We propose to open talks with the European countries" because Iran can defend its positions in this regard and we believe to be a vanguard and "of course you should put the US aside since they are cunning", Amoli Larijani said, addressing a forum on Islamic Human Rights in Tehran.

"They (the Americans) showed in the nuclear deal (between Iran and the world powers) that they are cunning and as the Leader (Ayatollah Khamenei) said we will not have other deals (with the US) like the nuclear deal and other negotiations," he added.

"We should hold talks with the Europeans since we believe in our words (on human rights issues)," Amoli Larijani said.

Tags: Defense Iran EU Amoli Larijani
Short Link rasanews.ir/201mRp
Share
0
Please type in your comments in English.
The comments that contain insults or libel to individuals, ethnicities, or contradictions with the laws of the country and religious teachings will not be disclosed