Rasa - The United Nations (UN) has distributed more than 1.7 million dollars in aid among Palestinian refugee families, who lost their homes in Israel’s latest military onslaught on the Gaza Strip. 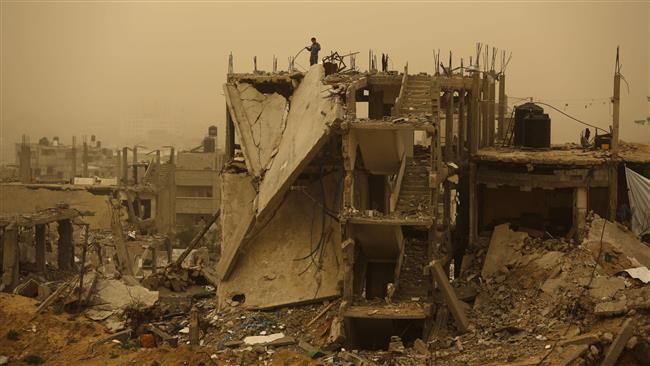 RNA - The United Nation Relief and Works Agency for Palestine Refugees in the Near East (UNRWA) said in a statement on Monday that it had allocated 951,000 dollars for reconstruction and 759,000 dollars for intensive repair work to 242 refugee families in the impoverished Palestinian coastal enclave.

Israel continues to carry out airstrikes against the Palestinian sliver from time to time. Israeli soldiers also shell Palestinian lands in the northern and eastern sectors of the terrain on a fairly regular basis, preventing farmers from working on their own lands.

Additionally, the Gaza Strip has been under an Israeli siege since June 2007. The blockade has led to a dramatic decline in the standards of living as well as high levels of unemployment and poverty.

Bo Schack, the director of operations for UNRWA in the Gaza Strip, warned last week that the Israeli blockade on the Gaza Strip and restrictions on the entry of construction materials into the enclave “are negatively impacting the lives of Palestinians there.”

He said Israeli actions are hindering peace and stability in the Gaza Strip, calling for measures to alleviate the sufferings of Gazans.

The Israeli minister for military affairs Avigdor Lieberman threatened on Monday that the Tel Aviv regime’s next war on Gaza would be the “last” one, and that it would “totally destroy” the Islamic resistance movement, Hamas.

Fathi Hammad, a political leader of Hamas, later dismissed the remarks by the extremist Israeli politician.

“All previous defense ministers have threatened us and all of them have died. The last of them is (Shimon) Peres, who is resting in the tombs of hell. So we are in no way afraid and this is a powerful message from Gaza to Lieberman,” he said.

Tags: Israel Palestine Gaza
Short Link rasanews.ir/201mRo
Share
0
Please type in your comments in English.
The comments that contain insults or libel to individuals, ethnicities, or contradictions with the laws of the country and religious teachings will not be disclosed