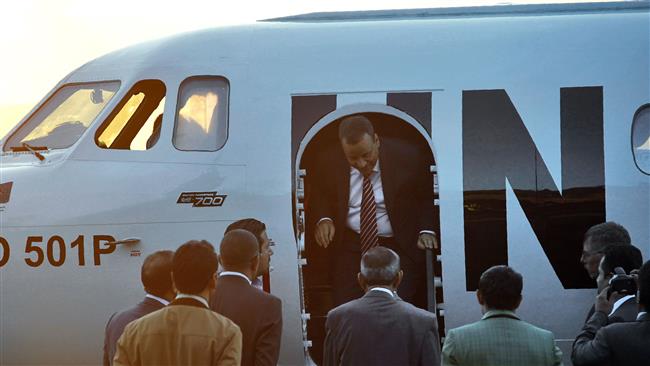 RNA - Large crowds of protesters, who gathered outside a Sana’a hotel where UN Special Envoy for Yemen Ismail Ould Cheikh Ahmed was staying, accused him of “sympathizing with Al Saud.”

"Leave, leave Yemen," the demonstrators chanted. "The UN and the Security Council are complicit in the killing of Yemenis," read one of the banners at the protest.

The protesters, dressed in shirts showing pictures of the victims of an October 8 Saudi airstrike on a funeral in Sana’a, blamed the UN for inaction in the face of the Saudi aggression.

"Yemenis are massacred and we hold the UN responsible for the actions of Saudi Arabia, America, and Israel," shouted the protesters.

On October 8, in one of the deadliest attacks on Yemen, Saudi warplanes bombarded a funeral hall packed with mourners in Sana’a, killing at least 140 people.

Washington has been providing logistic and surveillance support for Saudi Arabia in its bloody campaign.

Witnesses said the mass demonstration ended peacefully as the UN envoy was to leave the hotel for Sana’a airport.

A statement published by local Yemeni media said the demonstrators "condemn the UN envoy's intentional obstruction of the [peace] talks" and his "silence on the crimes and massacres committed by the Saudi aggressors" against Yemenis.

Despite renewal calls by the UN envoy, a 72-hour ceasefire ended on Saturday. The truce had been brokered by the UN to allow aid to reach families trapped in areas cut off by the war in Yemen.

More than 10,000 people have been killed since the regime in Riyadh launched its campaign in March 2015. The military aggression was meant to undermine the Houthi Ansarullah movement and reinstall Abd Rabbuh Mansur Hadi, a staunch ally of Riyadh who has resigned as Yemen’s president.

Tags: Yemen UN Saudi
Short Link rasanews.ir/201mRj
Share
0
Please type in your comments in English.
The comments that contain insults or libel to individuals, ethnicities, or contradictions with the laws of the country and religious teachings will not be disclosed