Rasa - Ballistic missiles launched by Yemeni forces have destroyed a Saudi national guard barracks and severely damaged a military base in the kingdom’s region of Najran. 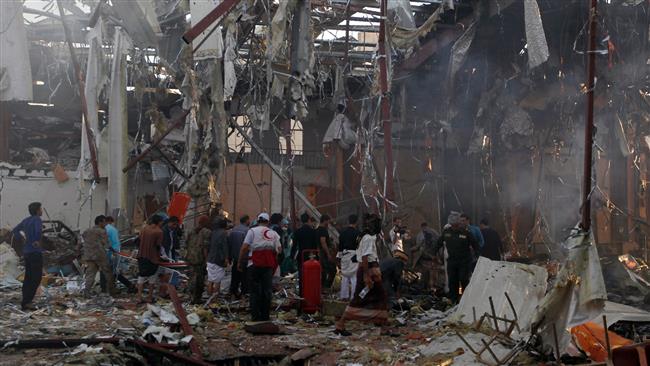 Another site belonging to the Saudi mercenaries also came under similar attacks in the kingdom’s southwestern region of Jizan.

Such attacks are part of a drive by Yemeni forces and allies to avenge Saudi Arabia’s relentless military aggression against the country.

Meanwhile, Saudi warplanes have increased their relentless airstrikes on Yemen, just one day after an UN-backed ceasefire expired.

At least six civilians were killed as Saudi jets used internationally-banned cluster bombs on the Baqim district in Sa’ada province.

Air raids were also launched on civilian facilities in Nihm, Naqim and Hafa districts in in the capital, Sana’a, and on a water storage facility in the western port city of Hudaydah.

Attacks were also launched on the provinces of Ta’izz and Hajjah.

Despite renewal calls by the UN’s Special Envoy for Yemen Ismail Ould Cheikh Ahmed, a 72-hour ceasefire ended on Saturday. The truce was brokered by the UN to allow aid to reach families trapped in areas cut off by the war in the impoverished country.

More than 10,000 Yemenis have been killed since the regime in Riyadh launched its deadly campaign against Yemen in March 2015. The military aggression was meant to reinstall Abd Rabbuh Mansur Hadi, a staunch ally of Riyadh who has resigned as Yemen’s president.

Tags: Yemen Saudi
Short Link rasanews.ir/201mRR
Share
0
Please type in your comments in English.
The comments that contain insults or libel to individuals, ethnicities, or contradictions with the laws of the country and religious teachings will not be disclosed