Rasa - Syrian government soldiers, backed by fighters from popular defense groups, have managed to liberate a strategic high ground in the city of Aleppo from the clutches of foreign-sponsored militants amid attempts to flush the extremists out of the strategic northwestern city. 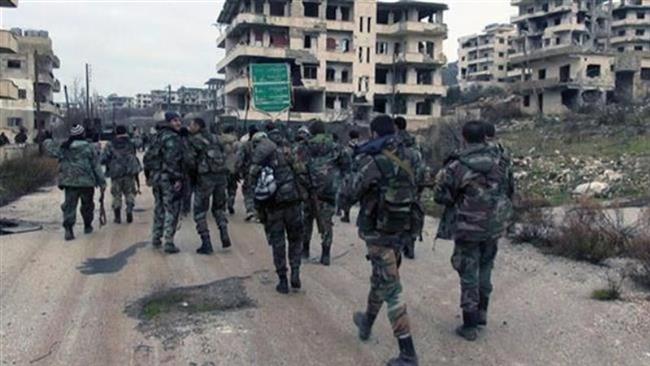 RNA - Military sources told the official news agency, SANA, that the government troops took the hilltop of Bazo on the southern edge of Aleppo, near military bases, on Monday.

Sources said after the government forces captured Bazo, they shelled the nearby militant positions.

A video footage released by the Syrian army showed tanks and cannons pounding militants’ positions in the troubled area.

The so-called Syrian Observatory for Human Rights (SOHR) also confirmed that government troops have captured a strategic high ground in the militant-held parts of Aleppo.

SANA, meanwhile, said that militants shelled the areas under government control in Western Aleppo. The shelling killed at least one person and wounded seven others.

The ceasefire expired on Saturday evening, after a one-day extension on Friday. The truce was aimed at permitting civilians and foreign-sponsored militants to leave the eastern areas of the city.

Sergei Ryabkov, the Russian deputy foreign minister, has said that Russia is not considering any extension of a ceasefire in Syria’s northwestern city of Aleppo.

“The question of renewing the humanitarian pause is not relevant now,” Ryabkov told Interfax news agency, adding, “Over the last three days, what was needed did not happen.”

"In order to resume it, our opponents need to make sure the anti-government groups behave properly," the Russian diplomat said.

Aleppo has been divided between government forces in the west and the Takfiri terrorists in the east over the past few years.

The Syrian army has vowed to press ahead with its counter-terror operations and drive terrorists out of their major positions.

The Takfiri militants operating in Syria have suffered major setbacks over the past few months as the Syrian army has managed to liberate more areas.

Tags: Syria Aleppo
Short Link rasanews.ir/201mRO
Share
0
Please type in your comments in English.
The comments that contain insults or libel to individuals, ethnicities, or contradictions with the laws of the country and religious teachings will not be disclosed