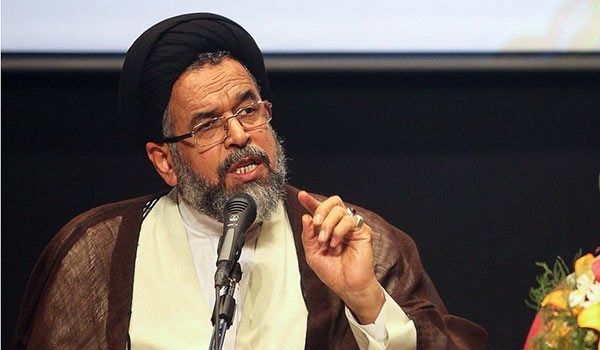 RNA - “The enemy is attempting to create an insecure environment in the country by creating divisions among the Shiite and Sunni Muslims," Alavi said, addressing a ceremony in the city of Delijan in Central Iran.

The intelligence minister noted the enemies of Iran are constantly seeking to make the country insecure, and said, "All of these plots have been foiled.”

Alavi did not give any further details about the enemies' plots.

He said that the efforts of the intelligence ministry officials have led to “unparalleled security in Iran".

“Today, hand-made explosives are entering the homeland from the East and Western parts of the country,” Alavi said.

He went on to say that the Iranian intelligence forces have been discovering all such attempts to smuggle explosives and they have been the ones “to pull the trigger” first.

Alavi said that such an atmosphere of “constant security” in Iran, which is located in a region which is surrounded by wars and conflicts, has contributed to the willingness of foreign investors to bring their money into Iran.

"Insecurity in the region has prompted many investors to take part in economic cooperation in Iran, and this is the result of strong and admirable security in the country,” he said.

Iran has succeeded in protecting itself from the spillover of terrorism and conflict -- constant features of life in a number of regional countries -- due to high vigilance by its intelligence and security forces.

In relevant remarks in mid-October, Alavi announced that his forces had detained several foreign Takfiri terrorists in the Southern province of Fars, seizing over 100kg of explosives.

"During the operations, a number of terrorists, all of them non-Iranian nationals, were arrested and over 100kg of explosives and other equipment were discovered and seized from the terrorists," Alavi said.

Noting that the Takfiri terrorists intended to carry out sabotage acts inside Iran, he said that they were detained in cooperation with other Iranian security forces in Fars province.

Relevant reports said on Tuesday that the Islamic Revolution Guards Corps (IRGC) forces clashed with a terrorist team sent by PJAK (the Party for Free Life of Kurdistan) in the Western province of Kurdistan.

The members of the terrorist group who sought to enter Iran were identified by IRGC forces in Golchidar region of Marivan town in Kurdistan province and were forced to flee, leaving a number of their light and semi-heavy weapons behind.

According to the local officials, the terrorist group also launched an RPG attack against the IRGC forces but the RPG round failed to explode.

Commander of the IRGC Ground Force Brigadier General Mohammad Pakpour announced in June that his forces had killed a commander of PJAK terrorist group along with 4 of his comrades in Northwestern Iran.

"5 members of PJAK terrorist grouplet were killed in intelligence operations in the Northwestern parts of the country," Pakpour told FNA.

Stressing that no members of the terrorist group could escape from the region, he said, "One of the slain terrorists was a PJAK commander in the region."

Pakpour said that during the operations, a number of light weapons were seized by the IRGC forces, adding that the terrorist group was behind the killing of several people in the region.

Tags: PJAK IRGC Alavi
Short Link rasanews.ir/201mRJ
Share
0
Please type in your comments in English.
The comments that contain insults or libel to individuals, ethnicities, or contradictions with the laws of the country and religious teachings will not be disclosed