Rasa - Saudi Arabia has resumed its airstrikes against Yemen after the expiry of a three-day ceasefire in the war-ravaged country. 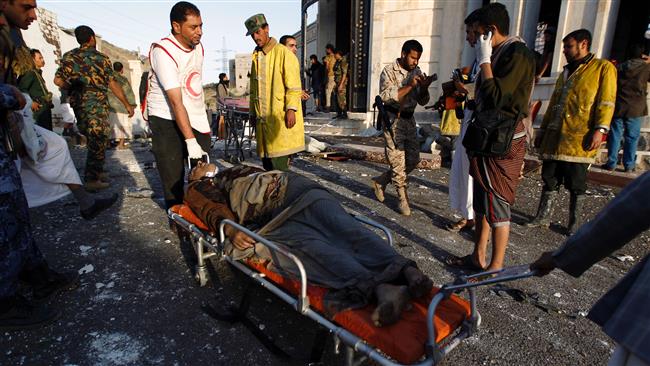 RNA - The Saudi jets conducted more than 16 airstrikes on areas across the provinces of Sana’a, Ta’izz, Hudaydah and Hajjah at dawn on Sunday, Yemen’s al-Masirah television reported.

Several neighborhoods in Sana’a, including Nihm, Naqim and Hafa as well as Deylami airbase were targeted in rocket attacks.

The strikes happened hours after the 72-hour ceasefire ended without renewal. The truce was brokered by the UN to allow aid to reach families trapped in areas cut off by the war in the Arab country.

The raids further came before the arrival in Sana’a of UN Special Envoy for Yemen Ismail Ould Cheikh Ahmed, who is expected to discuss options for a political solution to the conflict.

On October 8, in one of the deadliest attacks in the impoverished country, Saudi warplanes bombarded a funeral hall packed with mourners in Sana’a, killing over 140 people and injuring at least 525 others.

Two weeks later, the Joint Incidents Assessment Team claimed that the Riyadh regime had “wrongly targeted” the site based on what it called bad information.

The panel of experts also said preliminary information indicates that the incident “resulted in a disproportionately higher numbers of civilian casualties, when compared to military casualties, and that this could have been anticipated prior to the attack.”

The Sana’a bombing was not the first attack on civilians by Saudi jets as they have targeted busy markets, schools, weddings and hospitals over the past year, resulting in hundreds of deaths and thousands of injuries.

In another development on Sunday, an unnamed military source said that a unit of the Yemeni army and Houthi fighters conducted rocket attacks against a place of gathering of Saudi mercenaries in Lahij’s Kahboub district, killing and injuring a number of them.

Another site belonging to the Saudi mercenaries also came under similar attacks in the kingdom’s southwestern region of Jizan.

Yemen has seen almost daily military attacks by Saudi Arabia since late March 2015, with the UN putting the toll from the aggression at more than 10,000.

The offensive was launched to crush the Houthi Ansarullah movement and its allies and bring back the former Yemeni government to power. The US has been providing logistic and surveillance support to the kingdom in the bloody military

Tags: Yemen Saudi
Short Link rasanews.ir/201mRA
Share
0
Please type in your comments in English.
The comments that contain insults or libel to individuals, ethnicities, or contradictions with the laws of the country and religious teachings will not be disclosed