Rasa - The Islamic Awakening Supreme Council wrapped up its 9th session in the Iraqi capital of Baghdad on Sunday with a communiqué outlining plans to deal with the challenges that foreign powers pose to Muslim countries, including Syria, Iraq, Yemen and Palestine. 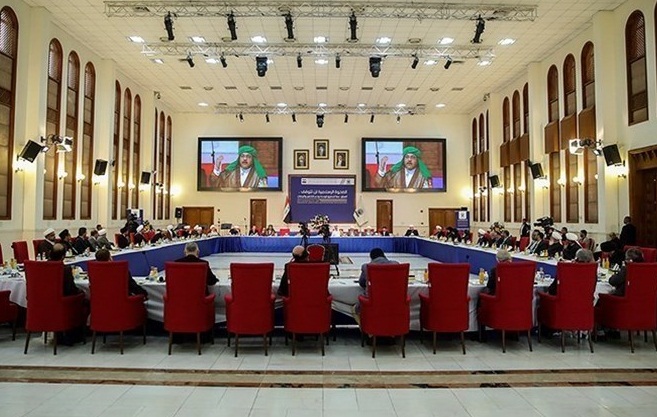 RNA - The two-day gathering in Baghdad was attended by more than 50 clerics, scholars and intellectuals from 22 Islamic nations.

In the communiqué issued at the end of the conference, the participants hailed Islamic Awakening as a major movement that continues to thrive despite vain attempts against it by international Zionism.

According to the statement, Muslim countries need to unite by sticking to the “mutual and fundamental Islamic values,” namely the holy Quran and the Sunnah of Prophet Muhammad (PBUH).

It has also warned against the “modern challenges” the Muslim world faces today, pointing to the spread of Islamophobia, sectarian currents in the Islamic world, misunderstandings, divisive measures and lack of knowledge about religious commonalities of Muslims.

On the situation in Iraq, the communiqué hailed the Arab nation’s fight against terrorism and its war with the Daesh (ISIL) terrorist group and those supporting the notorious group militarily, financially and ideologically.

It also underlined that any assistance for Iraq in the fight on terrorism must be provided while respecting the Arab nation’s sovereignty and territorial integrity and avoiding any interference in its internal affairs.

As regards the crisis in Syria, the communiqué blamed the drawn-out war on certain regional and trans-regional powers that deploy Takfiri terrorists to the Arab country. It also noted that the Syria crisis would be settled only through “negotiation among the Syrian groups and respect for Syria’s territorial integrity, independence and sovereignty.”

The statement also referred to Yemeni people’s resistance against relentless Saudi attacks as an embodiment of the Islamic Awakening movement.

The illegitimate Saudi-led military campaign against Yemen, which has been killing children and women, is an example of war crimes, the communiqué deplored, saying any decision by the people of Yemen must be respected by other countries.

It further described the cause of Palestine and liberation of al-Quds as the Islamic world’s overriding concern, decrying the West’s muted response to the Israeli atrocities against Palestinians.

The participants then called for efforts to release the leaders of Islamic Awakening movement who have been captured by the governments of Bahrain and Nigeria.

“Today, the Islamic Awakening movement and the Muslim world need to be cautious about the proxy wars waged by the hegemonic system and international Zionism, and at the same time should counter and not neglect the enemy’s soft wars that employ public diplomacy and media diplomacy, which are carried out by huge investment in culture and arts,” it concluded.

Tags: Islam Iraq
Short Link rasanews.ir/201mR2
Share
0
Please type in your comments in English.
The comments that contain insults or libel to individuals, ethnicities, or contradictions with the laws of the country and religious teachings will not be disclosed