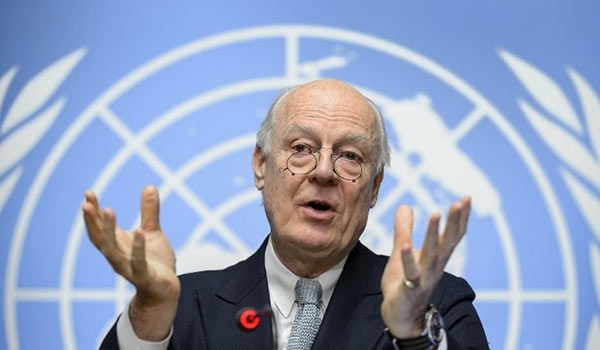 RNA - "Civilians in the Eastern districts of Aleppo city have been calling their relative and friends in government-held neighborhoods of the city to urge UN officials, mainly de Mistura, to help them leave Aleppo via six government-established corridors," the sources said.

"They have reported in their phone calls with friends and relatives that the terrorist groups open fire at anyone who trying to escape Aleppo," the local sources said.

Another local source said that the government's ceasefire and peace plan proved that the army tries hard to end bloodshed in Aleppo, while the terrorists groups continue to kill innocent people across Aleppo's districts.

Local sources reported on Saturday that the terrorist groups are still targeting people who are trying to leave the Eastern parts of Aleppo city via six government-established corridors.

"Tens of terrorist snipers have been deployed in buildings near the corridors and target civilians and even their comrades who try to leave Aleppo," the sources said.

"Jeish al-Fatah's mortar units, for their parts, are shelling the corridors. They even are targeting ambulances and rescue vehicles," they added.

Another local source said that civilians in the Eastern districts of Aleppo are furious after terrorists brutally executed 14 local officials who had called on the militants to leave the city.

Russian Foreign Minister Sergey Lavrov said on Friday that the Terrorists of Fatah al-Sham Front (formerly known as the al-Nusra Front) and Ahrar al-Sham are sabotaging UN efforts, supported by Damascus and Moscow, to deliver humanitarian aid to the Eastern districts of Aleppo.

“Both Fatah al-Sham and Ahrar al-Sham, along with other organizations cooperating with them, are ultimately sabotaging UN efforts to restore the delivery of humanitarian assistance to Eastern Aleppo that is carried out with the support of Russia and the Syrian government,” Lavrov said.

“(They) explicitly shell those routes through which such humanitarian aid can be delivered,” he underlined.

Lavrov said that according to Russian intelligence, all the groups which have been operating in Aleppo are “one way or another under the command” of Fatah al-Sham Front, “which controls Eastern Aleppo.”

Tags: Terrorist Syria Aleppo
Short Link rasanews.ir/201mQt
Share
0
Please type in your comments in English.
The comments that contain insults or libel to individuals, ethnicities, or contradictions with the laws of the country and religious teachings will not be disclosed