Rasa - Britain has been providing military training to the Saudi Arabian Air Force, while the country is carrying out atrocities in neighboring Yemen, a report says. 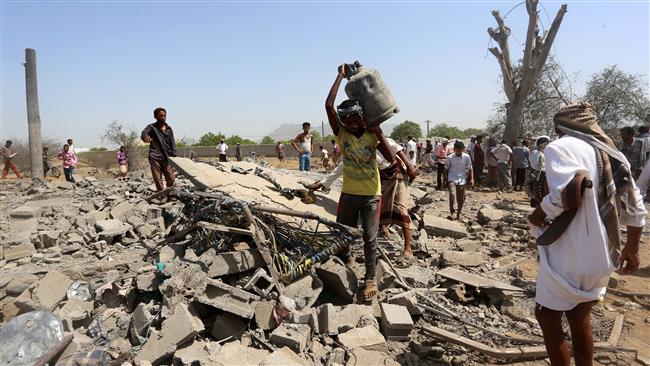 RNA - The UK's Liberal Democrats revealed that the British government is providing the training in both Saudi Arabia and Britain itself, The Independent revealed on Saturday.

The party’s Foreign Affairs spokesman, Tom Brake, obtained a parliamentary letter from UK Defense Secretary Michael Fallon, in which he acknowledged that the British government provides the training to Saudi pilots bombing civilians in Yemen.

Brake denounced the move as “shameful,” calling on the Ministry of Defense to end the training immediately.

“The Government must end its complicity in this murderous campaign,” he said. "It is shameful that the UK government is not only arming Saudi pilots, it is training them as well.”

Saudi Arabia has launched a war in Yemen on March 26, 2015, in a bid to undermine the Houthi Ansarullah movement and restore power to Saudi-backed former president Abd Rabbuh Mansur Hadi. Since the beginning of the aggression, almost 10,000 people, including over 2,000 children, have been killed.

The Liberal Democrats also wanted to know what the instructions and advice had been given by the British government on authorizing military operations and the “targeting of aerial operations” over the last year.

In response, Fallon claimed the government helps the Saudi Air Force in order to “improve their targeting processes and to support International Humanitarian Law (IHL) compliance.”

Fallon said the UK had delivered two training sessions in Saudi Arabia on the process for investigating alleged International Humanitarian Law violations, under a joint incident team it supported.

He, however, said that the government “has not provided any specific operational advice to the Kingdom of Saudi Arabia for operations in Yemen and has not provided training on political authorization of military operations.”

The Liberal Democrat party also insisted that the latest revelation requires an urgent action by UK Foreign Secretary Boris Jonson, who personally signs off any arms sales to countries such as Saudi Arabia.

London, which has been one of the biggest suppliers of weapons to Riyadh for 40 years, has come under fire for its continued sales of weapons to the kingdom during its war on Yemen.

Charity group Oxfam accused the British government of being in a state of “denial and disarray” over its arms supplies to Riyadh.

Earlier this year, Amnesty International found a banned British-made cluster bomb used by the Saudis in Yemen. The un-detonated bomb which was found in a remote village in northern Yemen was BL-755 cluster bombs.

Tags: Yemen UK Saudi
Short Link rasanews.ir/201mQq
Share
0
Please type in your comments in English.
The comments that contain insults or libel to individuals, ethnicities, or contradictions with the laws of the country and religious teachings will not be disclosed