Rasa - Iraqi Prime Minister Haider al-Abadi has called on Turkey and Saudi Arabia to stop interfering in the domestic affairs of his country, which is engaged in a campaign against the Daesh terrorist group. 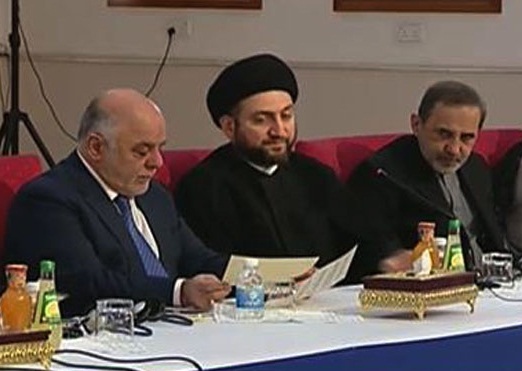 RNA - "We want the good of Saudi Arabia and Turkey provided that they do not interfere in the domestic affairs of our country," he told a forum of Muslim scholars and politicians in Baghdad Saturday.

The opening of the 9th session of the Supreme Council of the World Assembly of Islamic Awakening in the Iraqi capital coincided with the country's ongoing push to retake its second city of Mosul from Daesh terrorists.

Turkey is adamantly insisting that it wants to play a military role in the Mosul recapture despite Iraq's opposition, triggering a serious diplomatic row between the two neighbors.

Ankara has deployed troops to a base near Mosul, claiming that they were there to train Kurdish militants for the battle against Daesh.

Abadi said Turkey had sent troops without the Iraqi government’s request, adding Ankara is not battling Daesh but is trying to expand its outreach. Ankara, he said, did not help Baghdad when it was requested.

In the run-up to the Mosul operation, Saudi Arabia replaced its ambassador to Baghdad, who had repeatedly drawn the ire of Iraqi leaders for his meddling remarks. The kingdom downgraded its representation to the charge d'affaires level.

Without naming any country, Prime Minister Abadi said there are countries that support terrorism for their own benefits while others are seeking to sow sectarian discord.

"Daesh did not come to existence overnight. Certain sides used to support the group," he said.

Takfiri terrorists, he said, do not distinguish between Shia and Sunni Muslims or abide by any principles, adding they are trying to sow sectarian divisions.

Abadi said Iraq is capable enough to counter Daesh and terrorism, calling on the country to remain united. "We will hopefully fight and defeat the Takfiri terrorism," the prime minister added.

Iraqi Parliament Speaker Salim al-Jabouri, who is a Sunni Muslim, accused terrorists of attempting to spread their radical ideas in the name of religion.

He called for a meeting with the participation of Iraq, Turkey and Saudi Arabia to address their disputes, saying Muslim countries must take measures to counter terrorism.

Speaking at the summit, Ali Akbar Velayati, a senior adviser to Leader of Iran's Islamic Revolution Ayatollah Seyyed Ali Khamenei, said that the Islamic Awakening movement enjoys public support and continues to thrive despite obstacles and challenges in its way.

“Today, abundant opportunities have arisen in the region and Muslims are obligated to continue down their path with Islamic Awakening against the Takfiri ideology,” Velayati said.

Five years since the beginning of the wave of Islamic Awakening, enemies and opponents have practically failed to stop the movement even through creating Takfiri groups and hatching plots for partitioning countries, the Iranian official said.

He further slammed the Saudi regime for its covert role in all crises in the region, from Syria and Iraq to those in Yemen, Libya and elsewhere.

Saudi Wahhabism is using its petrodollars to sow discord in the Muslim world, he added.

Under an enemy plot, Muslim countries in the region have today been occupied with issues such as Daesh and Takfiri terrorism so the occupation of Palestinian territories by the Israeli regime would no longer be their priority, the official pointed out.

Velayati called for a return to true principles and values of the holy religion of Islam as the sole way out of regional problems.

Tags: DAESH Velayati Abadi Hakim Saudi
Short Link rasanews.ir/201mQn
Share
0
Please type in your comments in English.
The comments that contain insults or libel to individuals, ethnicities, or contradictions with the laws of the country and religious teachings will not be disclosed