Rasa - Iraqi forces make fresh advances as they engage in a sixth day of operations to retake the city of Mosul from Daesh a day after the Takfiri group's surprise attack on the oil-rich Kirkuk. 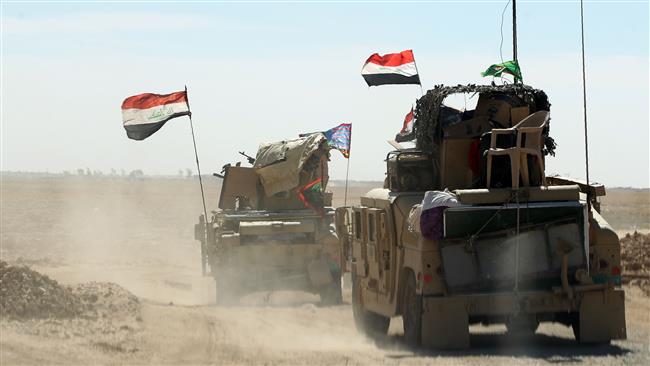 RNA - From the terrorist group's last stronghold, there are disturbing reports that Daesh militants have executed hundreds of civilians, including women and children.

Clashes resumed on Saturday in Kirkuk between the terrorists and Iraqi security forces. The al-Sumaria TV network said nine Daesh militants had been killed in fresh fighting.

The Takfiri group infiltrated Kirkuk on Friday in an attempt to open a new front and divert Iraqi troops from the most important battle underway in Mosul, located 178 km away from Kirkuk.

The offensive prompted Baghdad to send reinforcements. On Saturday, special military units were hunting down some of the dozens terrorists who stormed public buildings in the early hours of Friday.

“We have 46 dead and 133 wounded, most of them members of the security services, as result of the clashes with Daesh,” an Interior Ministry official told the AFP news agency.

The official said at least 25 Daesh attackers had been killed and several others wounded, including a Libyan believed to be among the raid’s masterminds.

In the ongoing battle for Mosul, troops entered the Keremles district of the Qayyarah town and liberated two nearby villages.

Daesh militants launched a bombing attack on the al-Hamdaniya town, also known as Qaraqosh, as troops moved to wrest its control from the terrorists. The terrorists also blew up the Nineveh Oberoi Hotel, one of the province’s biggest hotels.

Parliament Speaker Salim Abdullah al-Jabouri also said Iraqi forces had raided the Safinah village in Nineveh’s al-Shourah district. The village is situated parallel to the Tigris River, and is of much strategic importance.

Intense fighting broke out near the village of Tel Al-Samen south of Mosul. Daesh militants continue to occupy nearby villages, while improvised explosive devices hamper the army's progress.

As the army advances gained momentum, the Takfiri terrorists were reported to have executed around 285 people, including women and children, in and around Mosul.

Various sources said the group carried out the executions through Thursday and Friday. The terrorist group, they said, used bulldozers to dump the bodies in mass graves.

UN spokeswoman Ravina Shamdasani said on Friday Daesh militants have taken 550 families from villages around Mosul and are holding them close to Takfiri locations in the Iraqi city, probably as human shields.

US Defense Secretary Ashton Carter arrived in Iraq on Saturday for briefing on the ongoing battle for Mosul from American forces.

The US has deployed troops to areas near the battle scene as part of its contingent of 5,000 soldiers in Iraq.

An official said US forces at a base in Iraq had donned protective gear after winds from a burning sulfur plant shifted south.

Iraqi forces liberated the sulphur factory south of Mosul, a day after Daesh militants set it on fire releasing toxic smoke over the area. Two people reportedly died as a result of poisoning by the toxic chemical.

Tags: DAESH Mosul Iraq
Short Link rasanews.ir/201mQm
Share
0
Please type in your comments in English.
The comments that contain insults or libel to individuals, ethnicities, or contradictions with the laws of the country and religious teachings will not be disclosed