Rasa - Shia Muslims have held a demonstration in Pakistan’s southern city of Karachi, calling on the government to address the situation of pilgrims coming back from Iraq and protect them against attacks in border areas. 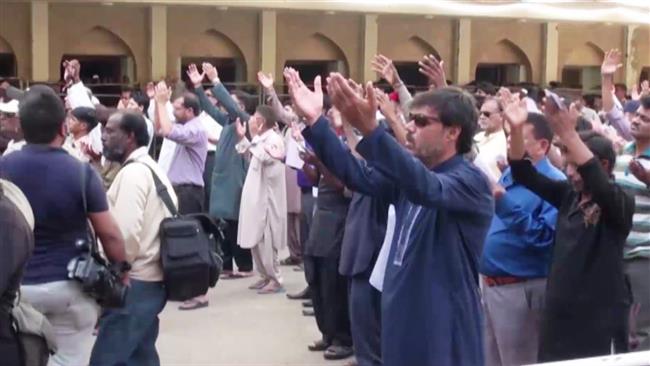 RNA - The demonstrators gathered outside Khoja mosque after Friday prayers.

Pakistani pilgrims are coming back from Iraq’s Karbala, where they had traveled to by land for ceremonies held in the martyrdom anniversary of Imam Hossein, the 3rd imam of Shia Muslims.

In mid-October, millions of pilgrims from all around the world gathered in Karbala, where the holy shrine of Imam Hussein is located.

The Pakistani protesters also called on the government to protect the Shia community against targeted killings carried out by militants.

The demonstration in Karachi was held a couple of days after a bomb attack at a Shia mosque in the city’s densely populated Liaquatabad district, where a child was killed and dozens of other people were injured.

Sectarian, political and ethnic violence in Karachi has claimed the lives of hundreds of people over the past years. Pakistan’s Shia leaders have called on the government to bring to justice those behind the targeted killings.

Several Sunni groups have also denounced the violence against Shia Muslims, describing the killings as a conspiracy against Pakistan.

Tags: Muslim Pakistan Shia
Short Link rasanews.ir/201mQl
Share
0
Please type in your comments in English.
The comments that contain insults or libel to individuals, ethnicities, or contradictions with the laws of the country and religious teachings will not be disclosed