All anti-Islamic Republic plots backfired on US, Israel

Rasa - A senior Iranian military commander says the Islamic Republic has managed to thwart all of the plots hatched by its enemies, mainly the Israeli regime and the US. 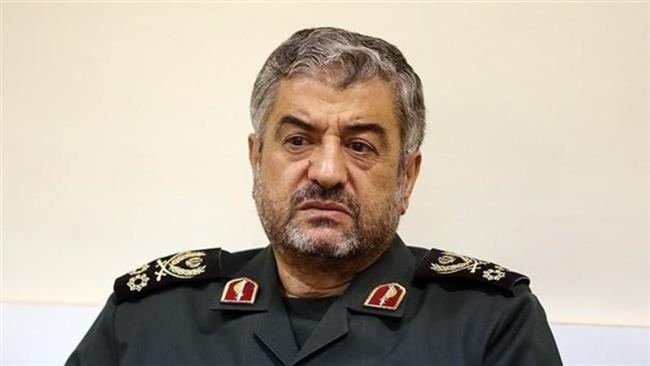 RNA - “A review of the policies adopted by [the 1979] Islamic Revolution’s enemies, the US and the Zionist regime [of Israel] in particular, shows that all their plots have failed and backfired on themselves,” Major General Mohammad Ali Jafari, the chief of the Islamic Revolution Guards Corps (IRGC), said on Friday.

He added that the West Asia region would have been in a much worse state had it not been for Iran’s Sacred Defense in the face of the eight-year 1980s Iraqi imposed war.

The top IRGC commander emphasized that the Islamic Republic and the anti-Israeli resistance movement have also succeeded in preventing “Israel from multiplying its tiny size.”

He said Iran currently enjoys such status that even other countries have no option but to consult the Islamic Republic to determine the fate of regional states, particularly Syria.

The latest round of talks aimed at putting an end to the crisis in Syria came to an end in the Swiss city of Lausanne on Saturday with the participation of the Islamic Republic.

The four-hour talks, which ended without the release of a joint statement, were convened by US Secretary of State John Kerry with the participation of foreign ministers from Russia, Iran, Iraq, Saudi Arabia, Turkey, Qatar, Jordan, and Egypt as well as UN Special Envoy for Syria Staffan de Mistura.

Iran and Russia are Syria’s main allies and have been assisting the government in Damascus in its fight against foreign-backed terrorist groups, including the Daesh Takfiri terrorists.

Since September 30, 2015, Russia has been conducting airstrikes against Daesh and other terrorist groups in Syria at the Syrian government’s request.

Iran has also been providing advisory assistance to the Syrian government.

Tags: IRGC Iran Syria Russia
Short Link rasanews.ir/201mQW
Share
0
Please type in your comments in English.
The comments that contain insults or libel to individuals, ethnicities, or contradictions with the laws of the country and religious teachings will not be disclosed