Speak up against hate crimes, Minnesota Somalis and supporters say

Rasa - Woman attacked at Applebee's among those who are calling for enforcement of state's tougher penalties. 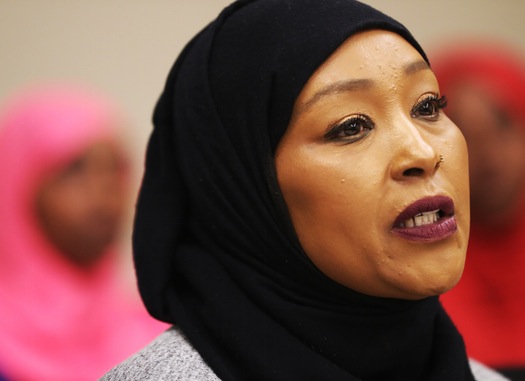 RNA - A woman attacked with a beer mug in Coon Rapids joined community leaders to call on Minnesotans to speak up louder against hate crimes and religious bias.

Asma Jama vowed to serve as an advocate for other victims Thursday, days after her attacker pleaded guilty to third-degree assault at an Applebee’s, acknowledging racial and religious bias had driven her.

Jama and leaders such as St. Paul City Council Member Dai Thao encouraged other victims of discrimination and hate crimes to come forward. They also said state leaders must continue to condemn Islamophobia and other prejudice, which they said have been on the rise during the run-up to the November elections.

“My message is, ‘Please, if you are a victim, if someone is harassing you, come forward,’ ” said Jama.

Advocates at the event hosted by the St. Paul-based nonprofit Voice of East African Women had planned to also call for the revival of legislation increasing penalties for felony assaults motivated by bias. But they learned Thursday that the bill actually passed in the final hours of this year’s legislative session.

Inspired by the attack against Jama and sponsored by state Sen. Ron Latz, DFL-St. Louis Park, the bill was folded into broader budget legislation after an intense fight over it.

Tags: Muslim Muslim Racial
Short Link rasanews.ir/201mQH
Share
0
Please type in your comments in English.
The comments that contain insults or libel to individuals, ethnicities, or contradictions with the laws of the country and religious teachings will not be disclosed