UK should be ashamed of its support for Saudi atrocities

Rasa - The British government should be “ashamed” of its unconditional support of Saudi Arabia despite the kingdom’s many atrocities against the people of Yemen, Syria and Bahrain, says a British scholar. 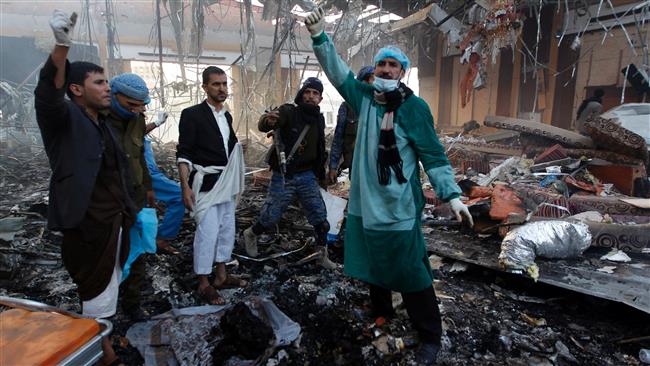 RNA - Dr. Rodney Shakespeare made the remarks on Thursday, a day after Tobias Ellwood, the British minister for the Middle East, passed off Saudi Arabia’s attack on a funeral in Yemen as a “deliberate error.”

More than 140 people were killed and over 525 wounded on October 8, when a Saudi air raid hit a community hall in the south of the Yemeni capital Sana’a.

Ellwood played down the tragic massacre as an “error” by “an individual who needs to be disciplined.”

Shakespeare fumed at the minister’s comments, saying it displayed nothing but the UK’s full support for the Saudi regime and its complicity in the crime.

The Saudi military forces, with the help of the UK and the US, invaded their southern neighbor in March 2015. The ongoing military campaign has killed at least 10,100 people.

“The purpose of the onslaught is to suppress any sort of democratic activity because Saudi Arabia… is a cruel autocracy and hates ordinary people; it even hates its own people,” the scholar said.

Shakespeare said Ellwood’s remarks were unacceptable and London should have called the Saudis out on their war crimes instead.

“Why don’t they say it was a ferocious deliberate attack and the UK government is part of that attack because we are hand in glove with Saudi Arabia,” Shakespeare noted.

Referring to the Riyadh regime’s “barbarous” actions against the people of Bahrain and Yemen, Shakespeare stressed that the UK supports the Saudi monarchy “in its wholesale promulgation and propagation of Daesh or ISIL.”

“Daesh gets no only its philosophy—its arrogant Takfiri ‘only I can exist and I can kill anybody’ philosophy —it gets its financing and its arming and everything else essentially via Saudi Arabia,” he continued.

“My UK government can say what they like about error [but] the fact of the matter is that Saudis deliberately bombarded the funeral, they have killed thousands and thousands of women and children and they are slaughtering the civilian population,” Shakespeare added.

Concluding his remarks, the British professor said the British government should be “ashamed” of its support for Saudi Arabia.

Tags: Yemen UK Saudi
Short Link rasanews.ir/201mQ5
Share
0
Please type in your comments in English.
The comments that contain insults or libel to individuals, ethnicities, or contradictions with the laws of the country and religious teachings will not be disclosed