Saudi Arabia joins US in imposing sanctions on Lebanese Hezbollah

Rasa - Saudi Arabia has joined the US in imposing sanctions on a number of Lebanese nationals and a company over their alleged financial support for Hezbollah resistance movement. 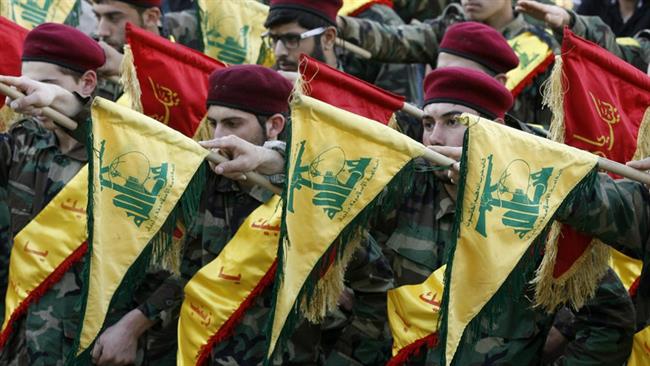 RNA - On Thursday, the Saudi regime slapped sanctions on two individuals -- Muhammad al-Mukhtar Kallas and Hasan Jamal-al-Din -- and one firm, accusing them of funneling money to Hezbollah.

Riyadh ordered the asset freeze of the individuals, prohibiting any commercial licenses to be issued to them in the kingdom.

The measure came after the US Treasury on Thursday announced that it had imposed sanctions on four Lebanese men and a firm, accusing them of financing Hezbollah.

The US Treasury claimed that the men -- Muhammad al-Mukhtar Kallas, Hasan Jamal-al-Din, Yosef Ayad and Muhammad Ghaleb Hamdar -- had raised and generated funds to help Hezbollah.

Adam Szubin, US Treasury's acting undersecretary for terrorism and financial intelligence, said the US designations were imposed under an executive order issued by former president, George W. Bush. The executive order, announced Thursday by the US Treasury Department, had been a joint action with Saudi regime aimed at "disrupting Hezbollah's worldwide commercial and financial infrastructure."

The Treasury has vowed in a statement to aggressively target Hezbollah and those supporting its activities. It has also blacklisted the Tabaja-controlled company, Global Cleaners, which it said had won sanitation services contracts in the Iraqi capital, Baghdad.

Last year, the White House approved a bill which imposed sanctions against banks that do business with Hezbollah.

Washington falsely claims that the resistance movement condones terrorism despite the fact that Hezbollah has been involved in fierce fighting against Daesh terrorists in Syria.

Hezbollah was founded in the 1980s following the Israeli invasion and occupation of southern Lebanon. The movement waged a long resistance campaign against Zionist troops and pushed them out of southern Lebanon in May 2000. Since then, the group has grown into a powerful military force and has successfully defeated the Zionist regime several times.

Hezbollah has also supported the Syrian army in its fight against the foreign-sponsored terrorists, who have been wreaking havoc in the Arab country since March 2011.

Since its inception in 1985, the Islamic resistance movement has been a thorn in the side of Israel and its foreign backers, such as the United States.

Tags: US Hezbollah Saudi
Short Link rasanews.ir/201mQ1
Share
0
Please type in your comments in English.
The comments that contain insults or libel to individuals, ethnicities, or contradictions with the laws of the country and religious teachings will not be disclosed