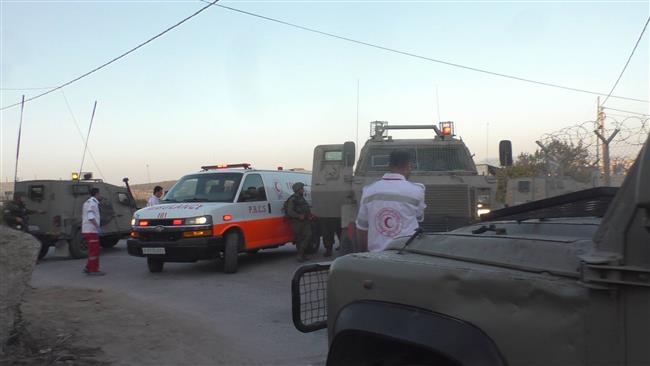 RNA - The incident took place in Beit Ummar, northeast of the city of al-Khalil, aka Hebron, on Thursday.

The victim, who was identified as 15-year-old Khalid Bahr Ahmad Bahr, was reportedly shot in the back, with the bullet coming out through his chest.

Witnesses also said that Israeli forces refused to provide cardiopulmonary resuscitation to the youth, with reports saying the regime forces transferred the victim’s body to an unknown location.

However, Awad noted that Israeli authorities had informed Beit Ummar mayor that Bahr’s body would be returned on Friday.

“Rocks were hurled at the soldiers, wounding one of them lightly,” an Israeli police spokeswoman said, claiming that the soldiers first fired warning shots and then fired toward the Palestinian youth.

Meanwhile, Israeli media reported that another Palestinian youth was detained during Thursday’s incident.

Israeli police and soldiers have come under heavy criticism for extrajudicial executions of Palestinian citizens, who did not pose a threat or could have been detained through non-lethal means.

Palestinian stone-throwers could be imprisoned for up to 20 years under a controversial law passed by Israeli MPs last July. The jail term will apply in cases where there is proof that the assailants intended to inflict harm.

The occupied territories have been the scene of heightened tensions since August 2015, when Israel imposed restrictions on the entry of Palestinian worshipers into the al-Aqsa Mosque compound in East Jerusalem al-Quds in an alleged bid to change the status quo of the Muslim site.

Over 250 Palestinians, including children and women, have been killed at the hands of Israeli forces in what is regarded as the third Palestinian Intifada (uprising), since the beginning of last October.

Tags: Israel Palestine
Short Link rasanews.ir/201mPz
Share
0
Please type in your comments in English.
The comments that contain insults or libel to individuals, ethnicities, or contradictions with the laws of the country and religious teachings will not be disclosed