Rasa - Iran’s ambassador and permanent representative to the United Nations has held the Israel regime responsible for the desperate plight of the Palestinian nation and exacerbation of tensions in the Middle East. 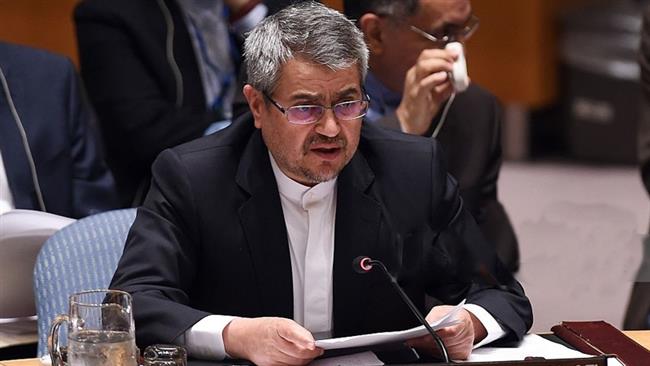 RNA - “The illegal and brutal Israeli occupation continues and causes so much anguish to the Palestinian people, and dangerously inflames tensions on the volatile situation in the region. The Israeli regime continues to breach international law, including humanitarian and human rights. By doing so, it inflicts widespread suffering to civilians and deliberately destabilizes the situation, with far–reaching and serious consequences for peace and security in the Middle East and beyond,” Gholam Ali Khoshroo stated at a Security Council Open Debate on “Situation in the Middle East, including the Palestinian Question” on Wednesday.

Khoshroo said the Israeli regime has continually intensified its illegal and oppressive measures against the defenseless Palestinian population over the past years, killed and injured many civilians, and deprived Palestinians of their right to protection.

The Iranian diplomat then pointed to Israel’s settlement expansion activities in the occupied West Bank, stating that they are in clear breach of the Fourth Geneva Convention, constitute war crimes under Rome Statute of the International Criminal Court, and demonstrate that Israel has never had any interest in peace with the Palestinians and its participation in the so-called peace process has only been aimed at covering up its policy of aggression.

Turning to Israel’s blockade on the impoverished Gaza Strip, the Iranian UN ambassador said the siege “is causing massive deprivation, hopelessness and a grave humanitarian crisis. The destructive impact of such Israeli violations is immense as reflected in rising tensions, deteriorating socio-economic conditions, and deepening among the Palestinian civilian population.”

“These problems have persisted and deepened because the international community has failed to do its part in dealing with the root causes, and naive trans-regional players have done erroneous actions,” he pointed out.

Elsewhere in his remarks, Khoshroo referred to Riyadh’s aerial bombardment campaign against its crisis-hit southern neighbor, stressing that the airstrikes have killed or permanently maimed thousands of civilians, including women and children, displaced millions of people, and turned Yemen from a disadvantaged country into a devastated one.

“All these horrendous and heinous attacks, which display total disregard for human life and international law are happening under the watch of Security Council, which has failed to take any action to stop them,” the Iranian diplomat said.

Saudi Arabia has been engaged in an atrocious campaign against Yemen since March 2015. The United Nations puts the death toll from the onslaught at about 10,000.

Tags: Iran Yemen UN Israel Palestine Saudi
Short Link rasanews.ir/201mPv
Share
0
Please type in your comments in English.
The comments that contain insults or libel to individuals, ethnicities, or contradictions with the laws of the country and religious teachings will not be disclosed