Rasa - President Hassan Rouhani says Iran wants to live in peaceful harmony with the countries in the region and across the globe. 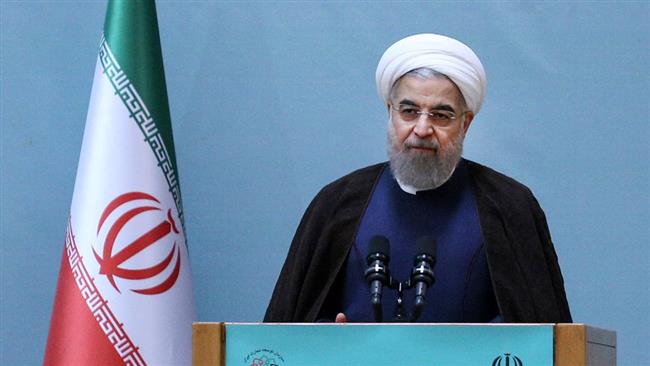 RNA - “In our target markets, we must be able to compete in terms of quality, price and packaging and reach the point where we beat our foreign competitors,” the president said in Tehran on Thursday.

Rouhani, who was speaking at a gathering of exemplary exporters in a ceremony to mark the national day of trade, emphasized Iran's openness to foreign investors and businessmen.

"The businessman and investor who want to come, we must be hospitable. They must come and leave Iran easily," Rouhani said in his speech.

"All the efforts... of the government in the last three years including in the (nuclear agreement) have been designed to remove obstacles in the way of businessmen, entrepreneurs, exporters of goods and services, entry of capital and banking relations," said Rouhani.

"Our aim was to remove Iranophobia. The government has done a great job in this regard. Iran is shouting with a loud voice … [for] peaceful coexistence with the region and the world," he said.

Government statistics show a growing trend in Iranian exports following the implementation of last year’s nuclear agreement, known as the Joint Comprehensive Plan of Action (JCPOA), and easing of sanctions as well as banking restrictions.

On January 16, Iran and the five permanent members of the United Nations Security Council – the United States, Britain, France, China and Russia – plus Germany started implementing the JCPOA, which they had clinched on July 14, 2015.

Tags: JCPOA Hassan Rouhani
Short Link rasanews.ir/201mPn
Share
0
Please type in your comments in English.
The comments that contain insults or libel to individuals, ethnicities, or contradictions with the laws of the country and religious teachings will not be disclosed