Rasa - A Saudi newspaper claimed that Turkey agrees with Russia that Fatah al-Sham Front (formerly al-Nusra Front) should be driven out of the Eastern part of Aleppo city. 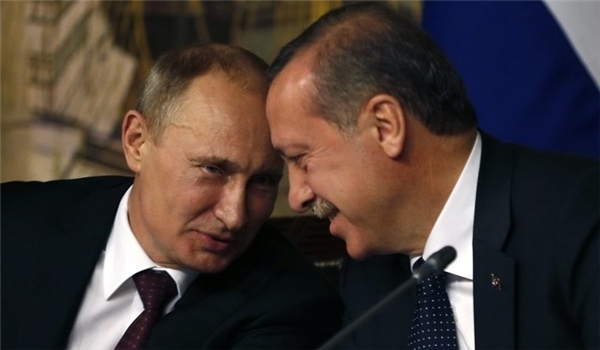 RNA - The Russian defense ministry announced on Tuesday that the country's warplanes and Syrian fighter jets have ceased their airstrikes on the terrorists' military positions in Aleppo city.

The Russian defense ministry reiterated that the US should take the present chance to convince the terrorist leaders in Aleppo to leave the city.

However, the terrorist groups which are present in Aleppo, including Ahrar al-Sham, have declared that in no way they are ready to leave the city and surrender themselves.

The Saudi newspaper said that Ankara is now in consensus with Russia on the need for the exit of Fatah al-Sham terrorists from Eastern Aleppo city to pave the way for the dispatch of humanitarian aid to the civilian population from now on.

Some informed sources disclosed that this issue (exit of Fatah al-Sham terrorists) from Aleppo has been raised during the recent visit of Russian President Vladimir Putin to Turkey and during the coordination meetings held between the two countries' military, intelligence and foreign ministry officials.

On Wednesday, Russia urged the UN Security Council to adopt a press statement on the need to separate terrorists from militant groups in Syria, and warned that the Fatah al-Sham Front  terrorists would face "unpleasant consequences" if they did not leave East Aleppo.

Russia’s Permanent Representative to the United Nations Vitaly Churkin said that under the current circumstances and ongoing pause in Russian and Syrian airstrikes over Aleppo, it was very important that the states, which could influence the armed groups, to step up efforts in a bid to separate armed units from terrorist groups, which are on the United Nations Security Council sanctions list.

"We firmly insist that all the parties in conflict stop fighting together with them. They should separate themselves from them and officially put their signatures under a ceasefire document. We have prepared a draft statement to this effect. Hopefully, it will be adopted by the Council’s members," the diplomat said noting that some countries could need additional time for considering the Russian initiative.

Churkin also warned that militants from the Fatah al-Sham Front terrorist group would face "unpleasant consequences" if they did not leave East Aleppo.

Tags: Turkey Russia Saudi
Short Link rasanews.ir/201mPW
Share
0
Please type in your comments in English.
The comments that contain insults or libel to individuals, ethnicities, or contradictions with the laws of the country and religious teachings will not be disclosed