Rasa - Iraqi Foreign Minister Ibrahim al-Jaafari has underlined the importance of the ongoing battle to retake the strategic northern city of Mosul from the Daesh Takfir terrorist group, saying that the country is defending the entire world against terrorists. 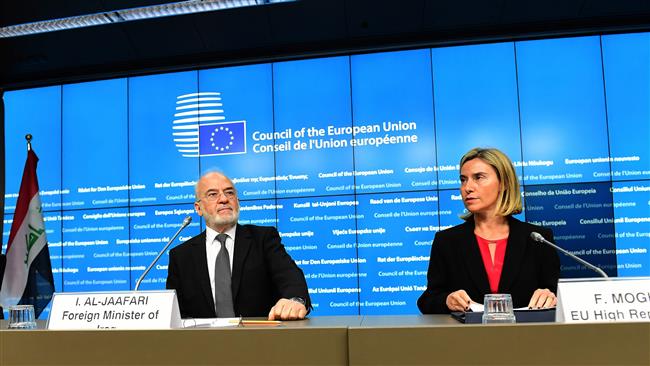 RNA - "We are not only doing this to defend ourselves; we are doing this for all the countries of the world," Jaafari said at a press conference with EU foreign policy chief, Federica Mogherini, in Brussels on Tuesday.

On Monday, the Iraqi army, volunteer Shia and Sunni fighters as well as Kurdish Peshmerga forces launched an operation to liberate Mosul, the last stronghold of Daesh in the Arab country.

Many believe that the recapture of Mosul, which fell to Daesh in 2014, would signal the terror outfit’s defeat in Iraq.

Elsewhere in his comments, Jaafari warned that Daesh is trying to use civilians as human shield in a bid to prevent the advance of Iraqi forces in Mosul.

"Iraqi military forces are ... ensuring the least possible losses and damage will occur," he said, adding, "We did this in Fallujah and also for Mosul because we know that our opponents are trying to use civilians as human shields to hamper our progress.”

Iraq needs foreign support due to the high costs of its battle against Daesh, Jaffari further said, noting that the liberation of Mosul needs double efforts.

Local Iraqi sources estimate that the number of those transferred to central Mosul to be used as human shields by Daesh stands at 25,000.

Daesh militants came from about 100 countries and their radical ideology spread to conflict zones when governments failed to stand up to them, the top Iraqi diplomat pointed out.

Mogherini, for her part, said that a consensus was reached with the Iraqi minister to ensure the safety and security of Mosul residents and guarantee respect for international law and humanitarian norms.

The EU official further stated that people who have fled their homes in Mosul can only return after the removal of all improvised explosive devices (IEDs).

"This has been going on for several weeks where we've seen civilians being forcibly detained and their movements being prevented where they can't get out of Mosul. They are being held there against their will," Davis said.

US President Barack Obama has been also quoted as saying that he is "confident” of the defeat of Daesh in Mosul which will be “another step toward their ultimate destruction."

Speaking at a joint news conference with Italian Prime Minister Matteo Renzi on Tuesday, Obama further warned of a tough battle ahead of Iraqi forces and stressed, "There will be advances and there will be setbacks."

Tags: DAESH Iraq
Short Link rasanews.ir/201mPG
Share
0
Please type in your comments in English.
The comments that contain insults or libel to individuals, ethnicities, or contradictions with the laws of the country and religious teachings will not be disclosed